Jimmy Kimmel and Matt Damon, the two warring friends are best suited to have taken part in the spoof video as the history of their friendly enmity dates back to the 2006 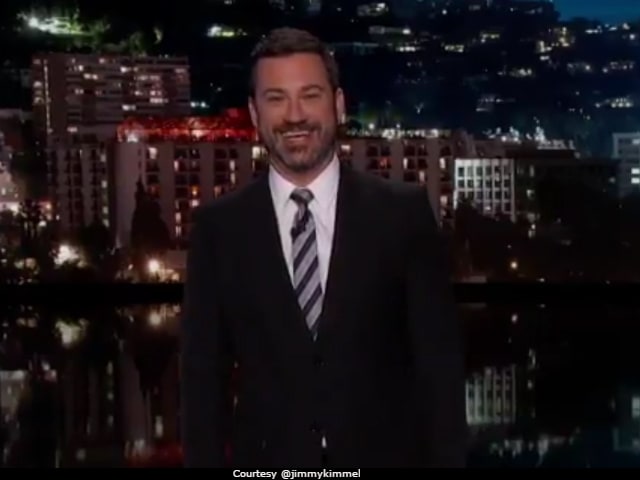 Jimmy Kimmel in a still from the video (courtesy jimmykimmel)

Celebrity TV show host Jimmy Kimmel roped in frenemy Matt Damon (who else!) for a spoof video which hilariously recreated a situation when a passenger was bumped off by United Airlines from an oversold flight. Jimmy Kimmel begins the video saying that United Airlines has successfully managed to feature in headlines but still feels the need for a new advert. The camera switches to an inflight setting and a video set against Matt Damon's voice. "We are United Airlines. We work hard to get you to your destinations and that's why we..." and Matt Damon pauses. "You know what? No, no, I can't do this anymore. Because I know how it feels to get bumped," he continues.
Just when The Martian actor decides it's time to stand up, someone intervenes and says: "We need the seat." As Matt Damon tries to save his seat citing his celebrity status, loud thuds and moans suggest someone is being beaten up. Seconds later, there's a change in the voice-over - "Hi, I'm Jimmy Kimmel. Let's fly the friendly skies," says the TV personality.


The voice of @United is MATT DAMON? pic.twitter.com/a6DlpBIIj8

Earlier this month, United Airlines received massive criticism after a video of the flight authorities dragging a passenger out the plane went was released and went crazy viral. The video showed that the passenger was hassled down the aisle with his glasses askew and a bloody face, which prompted huge outrage. A few days later, a 10-year-old passenger was thrown off a United Airlines flight, which was overbooked.
However, Jimmy Kimmel and Matt Damon, the two warring friends are best suited to have taken part in the spoof video as the history of their friendly enmity dates back to the 2006 when Matt appeared on The Jimmy Kimmel Live but learnt that Mr Kimmel was "out of time." The two have continued their mock feud since then with it culminating on this year's Oscars night. This year, Jimmy Kimmel hosted the Oscars and roasted Matt Damon saying: "I'm going to do everything I can to make sure that he doesn't win. My goal is to keep him offstage."
Matt Damon produced Manchester By The Sea was a Best Film nominee at this year's Academy Awards.