Jimmy Kimmel's Emotional Speech About Son: Is This His Defining Moment? 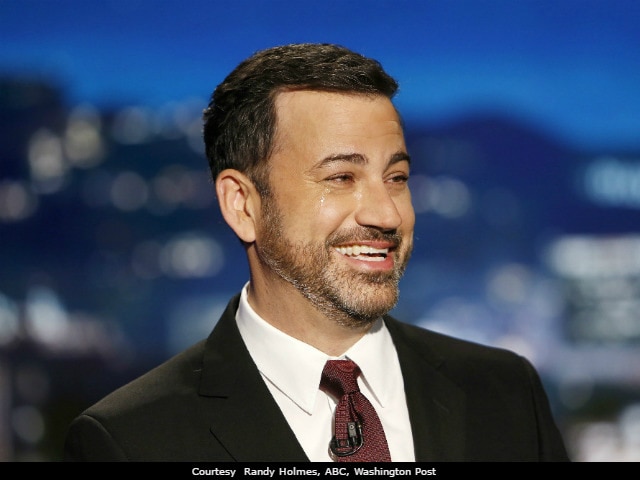 Of all the late-night comedians, it's Jimmy Kimmel who thus far has had the most influence in a serious political conversation in the Trump era. And he didn't do it with an impersonation or a particularly epic takedown or a meta-prank, but with an emotional, monologue about his son's heart condition

Did anyone really expect this? Wasn't Stephen Colbert eviscerating President Donald Trump or Samantha Bee destroying him - with jokes, of course - supposed to make some kind of difference in 2017?
Of all the late-night comedians - including ones who consistently make Trump the target of brutally biting jokes - it's Jimmy Kimmel who thus far has had the most influence in a serious political conversation in the Trump era. And he didn't do it with an impersonation or a particularly epic takedown or a meta-prank, but with an emotional, 13-minute monologue about his newborn son's heart condition.
Kimmel's comments about his son Billy were punctuated by tears, praise of Billy's nurses and doctors, and a plea that leaders in Washington make health care accessible to all - just as lawmakers on Capitol Hill debate how those with pre-existing conditions would fare under a GOP health-care proposal. "No parent should ever have to decide if they can afford to save their child's life," Kimmel said through tears. "It just shouldn't happen. Not here."
Video of Kimmel's monologue went viral, prompting a flurry of political op-eds, cable-news roundtable discussions, fact checks and praise from former President Barack Obama. "Well said, Jimmy," Obama tweeted. "That's exactly why we fought so hard for the ACA, and why we need to protect it for kids like Billy." Kimmel's name surfaced on newspaper front pages in stories about the congressional wrangling over passing a health-care measure.
White House budget director Mick Mulvaney even addressed Kimmel while trying to defend the GOP health-care plan: "Everyone, I think, agrees with Jimmy Kimmel that we have enough money in this country to provide care for those type of folks," Mulvaney said Wednesday on Fox & Friends, a program Trump is known to watch regularly.
He added: "If we give more control to the states they can figure out a way to best provide for children like Mr. Kimmel's baby."
Whenever a liberal celebrity entertainer gives a politically charged speech -- remember Meryl Streep at the Golden Globes? - there's inevitable pushback from the conservatives who dismiss the messenger as a Hollywood elitist giving lectures. Kimmel has drawn the same kind of ire, but his story has broken beyond the realm of pop culture trying to wade into politics. He clearly struck a nerve, and he didn't do it with an abrasive takedown. He didn't overtly attack Republicans or Trump. His plea "emotionally digs at the central debate over the GOP's Obamacare replacement right now," one that even Republican lawmakers haven't agreed upon, The Washington Post's Aaron Blake wrote.
It's remarkable given that political barbs have become a hot ratings commodity in the crowded late-night comedy landscape. Colbert, considered a harsher critic of Trump than Jimmy Fallon, has beaten his NBC rival in ratings for 13 consecutive weeks. NBC's Saturday Night Live is enjoying some of its best ratings in decades, and has doubled-down on topical political humor with plans for prime-time summer "Weekend Update" shows. Comedy Central rolled out a satirical Trump talk show last week, and has plans for a new news-comedy program in the fall.
Kimmel definitely isn't a Trump sympathizer; he has plenty of anti-Trump material. But the ABC host also isn't the comedic face of the #Resistance, staking out the same ground of hosts such as TBS' Bee, who hosted an alternative White House correspondents' dinner that took sharp aim at Trump and his supporters. In fact, the biggest political controversy to come from Kimmel's show this year was his interview with right-leaning actor Tim Allen, who compared being a conservative in Hollywood to living in 1930s Germany.
The sight of the former The Man Show host crying on-air Monday may be jarring for a general public who still thinks of him as the host who tricks people with YouTube hoaxes and tells parents to lie to their kids about eating all their Halloween candy. He's so known for mischievous pranks that when he hosted the Oscars, a bunch of people thought the big best-picture mix-up was just a classic Kimmel prank.
Fans of Kimmel know otherwise: The host is a sucker for sentimentality and not afraid of getting serious and shedding tears in front of a live studio audience. He's cried talking about his late uncle Frank Potenza, paying tribute to David Letterman and describing what happened to Cecil the lion.
Now Kimmel's late-night brand is no longer just heartless pranks and pretend-hatred of Matt Damon. It's also earnestness.
(c) 2017, The Washington Post
(Except for the headline, this story has not been edited by NDTV staff and is published from a syndicated feed.)