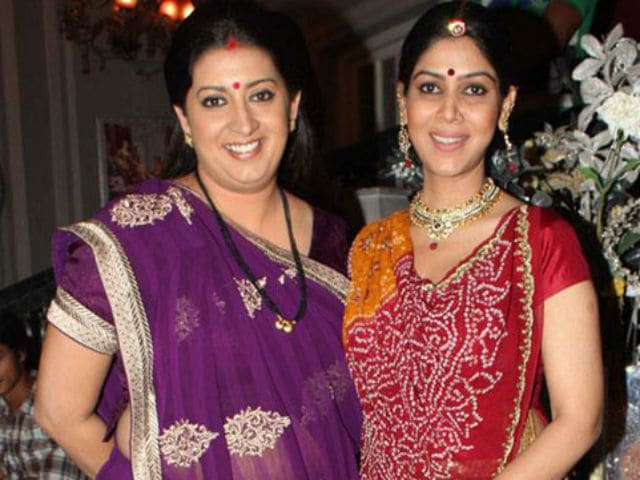 A big reunion just happened when producer Ekta Kapoor, met two of her favourite on screen bahus - Tulsi Virani (Smriti Irani) and Parvati Aggarwal (Sakshi Tanwar). These three women dominated the TV industry a decade ago with Kyunki Saas Bhi Kabhi Bahu Thi and Kahaani Ghar Ghar Kii, two of Ekta's top-rated shows. Ekta, 41, posted a picture of hers with Smriti and Sakshi, from the launch of her mobile app ALTBalaji. "Two stalwarts ! D twains meet in Delhi," she captioned the post. Smriti Irani, 41, is now the Union Cabinet Minister of Textiles while Sakshi Tanwar, 44, continues to work in the industry.
Here's Ekta Kapoor's post:

Major nostalgia?
Kyunki Saas Bhi Kabhi Bahu Thi and Kahaani Ghar Ghar Kii started airing in the year 2000. Both the TV shows gave stiff competition to other serials and were hugely popular. They aired for eight long years and broke all major records in terms of TRPs. Apart from Kyunki Saas Bhi Kabhi Bahu Thi, Smriti Irani has worked in serials like Hum Hain Kal Aaj Aur Kal, Ramayan, Thodi Si Zameen Thoda Sa Aasmaan and Virrudh. She joined BJP in 2003 and in 2014, she was inducted in Prime Minister Narendra Modi's union cabinet.
Meanwhile, Sakshi Tanwar after Kahaani Ghar Ghar Kii, continued her stint with television. She made a comeback in 2011 with Ekta Kapoor's Bade Achhe Lagte Hain. Last year, she featured in Aamir Khan's blockbuster film Dangal. Now, she is all set to make a debut in Balaji Telefilms web series Karrle Tu Bhi Mohabbat, in which, she will star opposite Ram Kapoor, her Bade Achhe Lagte Hain co-star.
Ekta Kapoor launched her mobile app ALTBalaji in Delhi on Friday. "ALT was an idea that came into being when Balaji Telefilms, which is known for family entertainment, decided to come up with clutter-breaking content. ALT because when you press ALT on your keyboard, a whole new signage comes out. It's for personal viewing," she told news agency IANS.
TV actor Mona Singh was also photographed at the launch. Check out these pictures here:


My bestie comes to wish us !

"There is a sense of relief she gets from web series. My biggest source of relief and enjoyment is that I am getting to do 20 episodes for the first time. I used to feel tired when I was doing 1,000 episodes for some of my shows," Ekta told IANS.
(With IANS inputs)