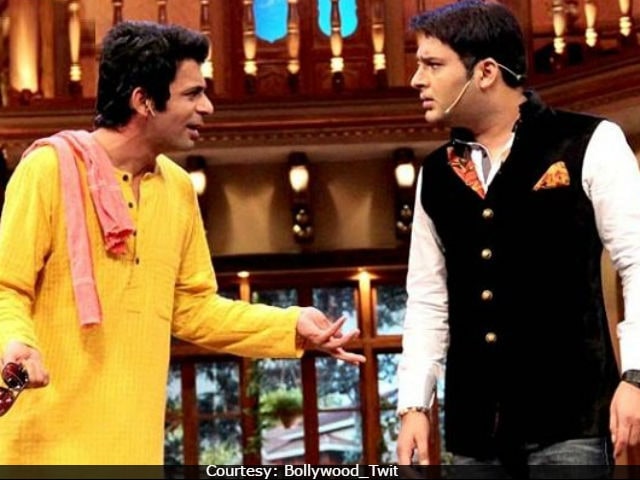 Kapil Sharma and Sunil Grover on the sets of the show (Courtesy: Bollywood_Twit )

On Saturday, ace comedian Kapil Sharma surprised everyone by introducing his girlfriend Ginni Chatrath on social media and soon after that, he made headlines for mid-air spat with his The Kapil Sharma Show co-star Sunil Grover. The Times Of India reports that while returning from Australia to Mumbai on Thursday night after a show, Kapil hit Sunil on the flight. The report states that the incident took place when Sunil was seated on his seat and Kapil suddenly walked up to him and abused him. The entire team of The Kapil Sharma Show's was in Australia for a tour. Quoting a source, TOI reports that Kapil held Sunil by his collar and raised his hand. However, Sunil didn't respond to Kapil's abuses and stayed quiet.
An eye witness travelling on the same flight with the show's team told The Quint, "Without any provocation, Kapil pounced on Sunil Grover. We saw Kapil loudly abusing Sunil. Sunil kept quiet, probably thinking that Kapil would calm down after the outburst. But Kapil got more aggressive. His loud abuses could be heard right across the flight cabin. He then physically assaulted Sunil. That's when all hell broke loose. The flight attendants rushed to the spot. They wanted to handcuff Kapil in order to restrain him. To his credit Sunil stood by his unruly colleague and asked the cabin crew to overlook his drunken behaviour."
"We're not surprised to hear this. Tension has been brewing between them," The Quint quoted a member of The Kapil Sharma Show as saying.
TOI reports that both Kapil and Sunil have unfollowed each other on Twitter.
Sunil Grover simultaneously plays Dr Mashoor Gulati and Rinku Bhabhi in The Kapil Sharma Show. Earlier, Sunil had quit the previous show Comedy Nights with Kapil due to payment issues.
Kapil Sharma, who made his Bollywood debut with the 2015 movie Kis Kisko Pyaar Karoon, introduced his lady love with this adorable post.