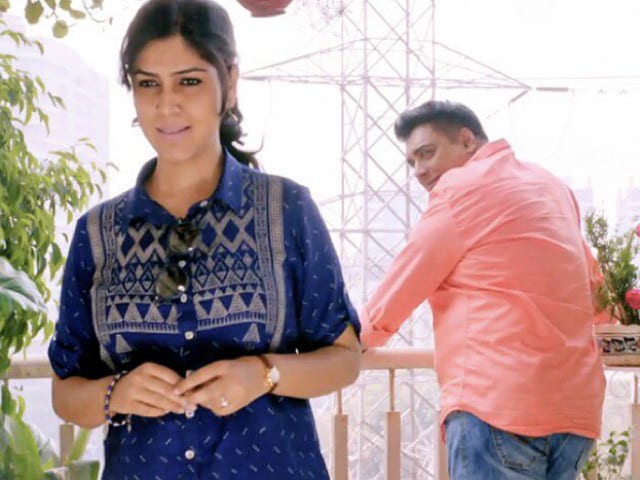 Karle Tu Bhi Mohabbat Trailer: A still from the trailer

Television's favourite onscreen couple - Sakshi Tanwar and Ram Kapoor - are all set to reunite for Ekta Kapoor's new web series, titled Karle Tu Bhi Mohabbat. The trailer of the web series released over the weekend and Twitter has suddenly woke up on Monday evening to celebrate the reunion of the much-loved TV couple. "Really, can't wait for it," read a tweet while another said: "You would be lying to yourself if you say there's nothing special about Ram Kapoor and Sakshi Tanwar's chemistry." "I'm very happy that my favourite stars are back again with a bang," another user wrote on Twitter. Sakshi Tanwar and Ram Kapoor famously starred as a couple in Bade Achhe Lagte Hain which ran from 2011 to 2014.


You would be lying to yourself if you say there's nothing special about Ram Kapoor & Sakshi Tanwar 's chemistry!#KarrleTuBhiMohabbatALT

When leads are shown as middle aged ppl,actors are also in their 40s but their chemiSTRy!
Ram Kapoor & Sakshi Tanwar #KarleTuBhiMohabbatAltpic.twitter.com/eh3a3sS2Sq

Basically this is all of us today
Happy teaRS
Ram Kapoor & Sakshi Tanwar are back omg still sinking #KarleTuBhiMohabbatAltpic.twitter.com/qQrmgP7i7t

Now, the actors are making a delightful re-appearance with Karle Tu Bhi Mohabbat which will be available on the official YouTube channel of Balaji Telefilms, owned by Ekta Kapoor and her family.
The trailer shows Ram Kapoor stars as superstar Karan Khanna in the web series while Sakshi Tanwar features as a doctor. The two become indispensable parts of each other's lives when Ram comes under Sakshi's guidance to battle alcoholism. A happy-go-lucky, carefree Ram Kapoor attempts to break the ice with Sakshi but fails at every step. Sakshi in turn rebukes him for trying to invade her personal space. "Aap na yahaan pe Ram hai, na Romeo, na koi Raghav na Devdas," she says.
Meanwhile, Ram Kapoor is amused by Sakshi's resistance and continues with his antics.
Watch the trailer of Karle Tu Bhi Mohabbat here: