TV actress Kavita Kaushik will marry Ronnit Biswas in Kedarnath on January 27. She made a formal announcement about the wedding through a text message 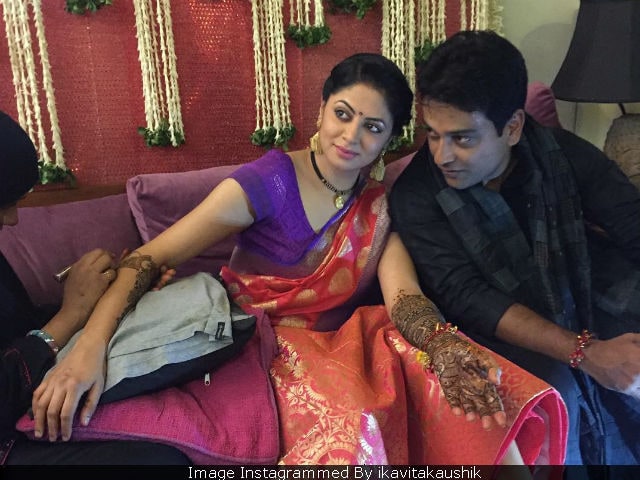 Television actress Kavita Kaushik is all set to marry long-time boyfriend Ronnit Biswas on January 27 and after her spectacular haldi ceremony on Monday, the FIR actress posted a stunning picture from her mehendi celebrations. She looked elegant in an orange sari and accentuated her look with a gajra and a pair golden earrings. Like the previous function, the mehendi ceremony was attended only be her close friends and family. Actress Aashka Garodia, Sayanti Singh, stand-up comedian Bharti Singh were a part of the do list. The couple will marry in Kedarnath temple. Kavita made her wedding announcement through a text message, where she invited her friends for the wedding and said that it was an 'impromptu' decision.
Here's what the bride-to-be posted:


With d #bride2be. Wishing @ikavitakaushik lotsa of happiness n a blissful journey ahead ..

I love you @ikavitakaushik, all inclusive. #forever

Ronnit too posted an adorable picture of the duo and captioned it as: "The most beautiful bride in the world. I'm the luckiest man alive."


The most beautiful bride in the world.. I'm the luckiest man alive @ikavitakaushik thank you!! It's shaadi time.. The hills -- here we come.. #KK #partnerincrime #mehendinight #bestfriend #shivparvati #allinone

Kavita Kaushik earlier dated actor Karan Grover, with whom she participated in the dance reality show Nach Baliye.
However, they broke up in 2008. She was one the participants in the eighth season of Jhalak Dikhhla Jaa.. Later, she dated actor Nawab Shah, but broke up last year.
She was seen in Kahaani Ghar Ghar Kii, Kumkum and appeared in a brief role in the Tumhari Disha and C.I.D.