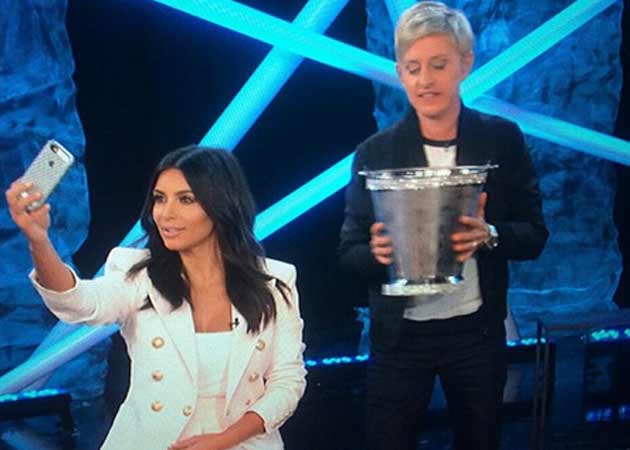 Better late than never! Yes, socialite Kim Kardashian seems to be following this rule when it comes to taking the Ice Bucket Challenge, days after a slew of popular celebrities did their bit to raise money for ALS (Amyotrophic lateral sclerosis). Hollywood celebrities who have sportingly turned self-soaking fundraisers for charity include Tom Cruise, Leo DiCaprio, Bill Gates, Mark Zuckerberg, Britney Spears and Victoria Beckham.

Kim squealed as host Ellen DeGeneres poured a bucket of icy cold water on her head on The Ellen DeGeneres Show. And all we heard Kim say before she braved the cold wave is "Oh my god, I don't even want to see this happening to me." The mother-of-one found it difficult to part with the camera and clicked a selfie as Ellen got ready to pour chilling water on her.

Kim looked classy in a white suit, with a double-breasted jacket having gold buttons, before taking on the challenge. The viewers shall have to wait for the episode to be aired to see how Kim looked after she got drenched. The trailer of the episode shows an enthusiastic set of audience cheering the reality TV star as she takes the challenge head on.

The Ice Bucket Challenge was initiated by Pete Frates, a former Boston College baseball player, who fell prey to ALS. The viral craze that caught on since, raised more than $100 million.

Kim took to Instagram to share an image of herself clicking a selfie while undertaking the Ice Bucket Challenge on The Ellen DeGeneres Show. She captioned the image "Yep this happened on @TheEllenShow Thanks to @SarahJessicaParker @miraduma @olivier_rousteing @GiuseppeZanottiWorld for the nominations #ALSIceBucketChallange".