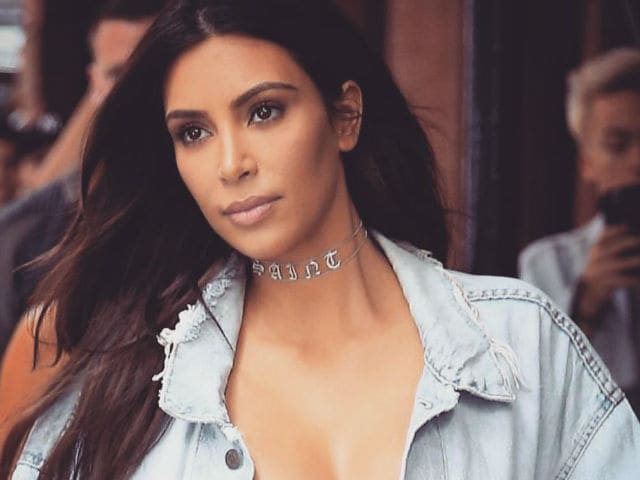 Reality TV star Kim Kardashian West reportedly wants to get a restraining order against Vitalii Sediuk, the prankster who has allegedly attacked her twice in two years, reported TMZ . The Ukrainian former TV presenter tried to kiss the 35-year-old star at the Paris Fashion Week, however his attempt was marred by Kim's bodyguard.
Vitalii tried to kiss Kim but her security team managed to wrestle him to the ground just beforehand. Sources close to the Kardashians said that Kim is planning to file a police report over the incident, which occurred as she was attending the Balmain fashion show. She's calling in her lawyers and wants a restraining order against Vitalii, who also targeted her at Paris Fashion Week in 2014.
After the incident, Kim praised her bodyguard Pascal Duvier and tweeted:


My security @PascalDuvier is a G

Mr Duvier shared what happened at the show:

Here's what Vitalii posted on Instagram after the incident:


I was protesting Kim for using fake butt implants. I encourage her and the rest of Kardashian clan to popularise natural beauty among teenage girls who follow and defend them blindly. P.s. I was sitting there outside the posh restaurant to use free wifi and eating my ice-cream. When all of a sudden, the pack of paparazzi came out and the car with Kim Kardashian. I swear I didn't know she was going to be there. So I had to come out with an idea very fast. Does it mean if I don't go to celebrities, they come to me? Lol Have a nice evening everybody! I have to finish my ice-cream.. Photo credit: Goffphotos #kimkardashian

Vitalii also 'manhandled' model Gigi Hadid at Milan Fashion Week last week. Gigi was walking towards a waiting car with her sister Bella Hadid when Vitalii grabbed and lifted her. The Victoria's Secret model fought him off and chased him and also tweeted: "I'm a human being and I have every right to defend myself. How dare that idiot think he has the right to manhandle a complete stranger? He ran quickly though."


@dailymail right now.. my comment: "While I consider Gigi Hadid beautiful, she and her friend Kendall Jenner, have nothing to do with high fashion. By doing this I encourage fashion industry to put true talents on the runway and Vogue covers instead of well-connected cute girls from Instagram. You can call it a manifest or a protest. This is also a wake up call for Anna Wintour who turned Vogue into tabloid by putting Kardashians and other doubtful celebrities on a cover of a well-respected magazine". #mfw #gigihadid #annawintour

Vitalii has targeted Hollywood stars Brad Pitt and Leonardo DiCaprio in the past.