Kishwer Merchant, Suyyash Rai Post Video From The Dancefloor Of Their Reception 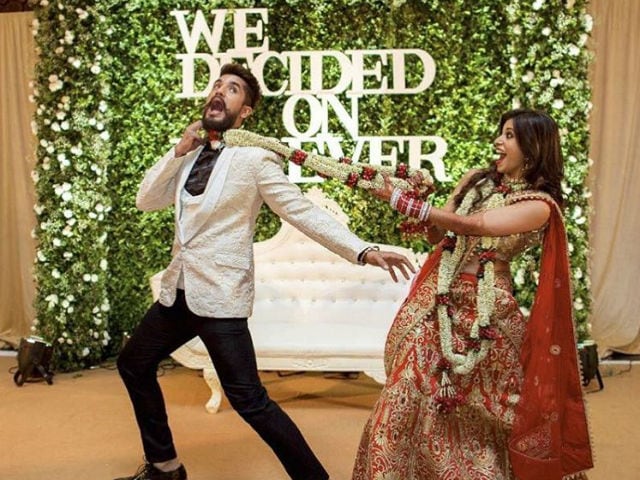 A week after her wedding to actor Suyyash Rai, TV star Kishwer Merchant has posted video of what went down on the dancefloor at their grand reception in Mumbai on December 16. Kishwer and Suyyash are seen embracing, exchanging rings and then slow-dancing in the video while their friends Asha Negi, Rithvik Dhanjani, Karan Wahi and others rock the dancefloor. The footage is set to the tune of Closer by The Chainsmokers. Kishwer and Suyyash, who met on the sets of Pyaar Kii Yeh Kahaani, married on December 16. They dated for six-odd years. The couple also appeared on reality show Bigg Boss 9 together. Kishwer Merchant currently stars in Brahmarakshas while Suyyash Rai's music video was released recently.
Here's the video of Kishwer, Suyyash and their friends dancing at their reception:


lets nacho #sukishkishaadi @knottingbells once again thank u so much.. u guys are superb

A week before the wedding, Kishwer, 35, was trolled because Suyyash, 27, is younger by a few years. She was apparently referred to as 'aunty' by a troll. Suyyash posted this indignant note on Instagram in response:


I was just reading few comments on insta..how easy it is now days for the kids on 15-16 years to write ANYTHING about ANYONE...on these social networking websites and specially when some1 is getting married...HOW CAN YOU ??? I feel bad for their parents and families...this is how they've been brought up If you cant write good dont...but atleast dont write bad... HAVE A HEART FOR GOD SAKE...even enemies would give blessings in such occasions,you all are still strangers.But i guess thats how they think they will look cool. God bless all And all my SUKISHIANS i love the enthusiasm and energy in yu guys about #SukishKiShaadi ...that is what keeps us going

#SukishKiShaadi was the hashtag that Kishwer and Suyyash created much before the wedding, to post details about the event. The hashtag was one of the top trends on social media on their wedding day. The internet went berserk over their wedding pictures.
Here are some pictures from their wedding diary:

Like actors Divyanka Tripathi and Vivek Dahiya, Suyyash and Kishwer too released a promo of their upcoming wedding's web-series a few days before.