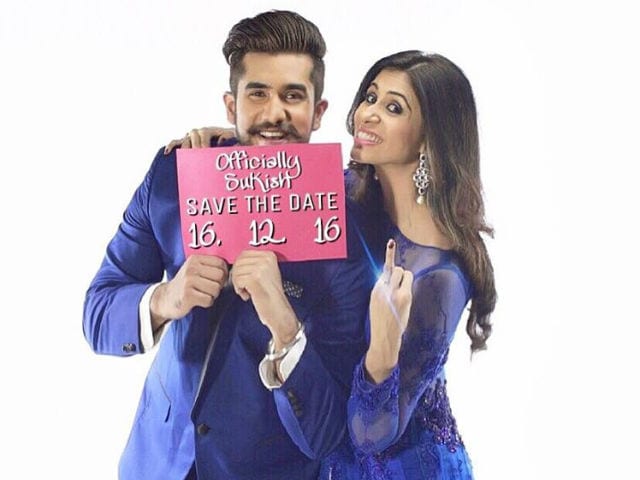 A day before her wedding to Suyyash Rai, bride-to-be Kishwer Merchant rocked her pre-shaadi shoot with her girlfriends. Earlier this month, the actress's friends and cousins had hosted a bachelorette party for her in Goa and they had a blast over there. Suyyash and Kishwer dated for about six years. Suyyash and Kishwer's wedding is on Friday. Celebrations have already begun with a mehendi and a photoshoot with her bridesmaids in Mumbai. "Thank you girls for always being there," Kishwer wrote in the caption accompanying the picture she posted on Instagram. Kishwer Merchant, who currently appears on the show Brahmarakshas, met Suyyash Rai on the sets of television serial Pyar Kii Yeh Ek Kahaani and after that, there was no looking back for the couple.
Here are some of the pictures from the pre-wedding photoshoot:

The bride-to-be was glowing in the red lehenga during the photoshoot and her girlfriends made sure that they complemented her.

A mehendi ceremony was also held on Thursday and Kishwer looked pretty in yellow and blue.
Check out what she wore:

A haldi ceremony was held on Wednesday.

Kishwer Merchant and Suyyash Rai last appeared on the reality show Bigg Boss Season 9 together.
The actress, 35, was trolled earlier this week because Suyyash, 27, is some years younger. After Kishwer was called 'aunty' by a troll, Suyyash posted a strong defence of her on his Instagram account.
This is what Suyyash had to say:


I was just reading few comments on insta..how easy it is now days for the kids on 15-16 years to write ANYTHING about ANYONE...on these social networking websites and specially when some1 is getting married...HOW CAN YOU ??? I feel bad for their parents and families...this is how they've been brought up If you cant write good dont...but atleast dont write bad... HAVE A HEART FOR GOD SAKE...even enemies would give blessings in such occasions,you all are still strangers. But i guess thats how they think they will look cool. God bless all And all my SUKISHIANS i love the enthusiasm and energy in yu guys about #SukishKiShaadi ...that is what keeps us going

The couple have always given fans major relationship goals with their adorable Instagram images and are quite active about keeping followers briefed and updated about wedding details. Ahead of the wedding, they also released a trailer of their upcoming wedding web series.

We wish Kishwer Merchant and Suyyash Rai all the very best.