Koffee With Karan 5: Aamir Khan will be seen with his Dangal co-stars Sanya Malhotra and Fatima Sana Sheikh 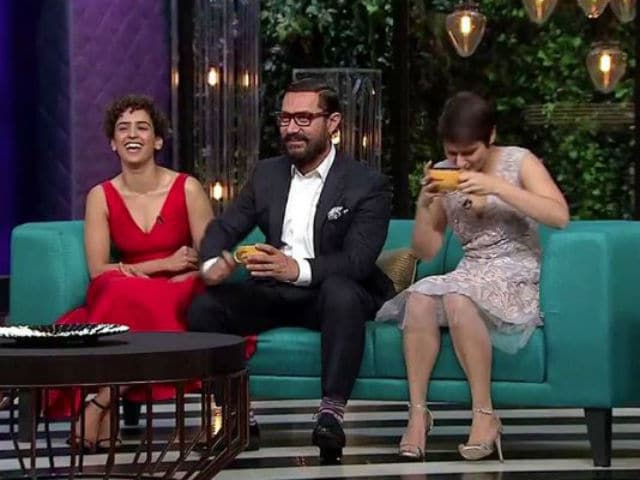 Salman Khan did the honours for episode 100 of Koffee With Karan and his friend and co-star Aamir Khan will be one of three guests on episode 101. The two guests sharing the Koffee couch with Aamir will be actresses Sanya Malhotra and Fatima Sana Sheikh, who play the actor's screen daughters in new film Dangal, out two Fridays from now. Of the Khans, Aamir is perhaps the most reserved - he never goes to award shows, rarely shows up at parties, tweets infrequently and only makes one film a year, if that. So, by a natural progression, seeing him on Karan Johar's chat show is going to be precious.
The episode has already been shot and from promo footage posted online, we already know that much of what is said on the Koffee couch will be haanikarak. To begin with Aamir Khan, 51, admits to having cried while watching the trailer of Dangal. This, of course, is no surprise to anybody who has followed the timeline of Aamir's weepiness ever since he was pictured wiping his eyes with a towel - a towel! - after a screening of Salman Khan's 2015 film Bajrangi Bhaijaan. Aamir Khan's lachrymose glands are his Achilles heel, so to speak, and they were not proof against the emotional tug of Dangal.
What else? Oh, yes - Aamir's 'daughters' Sanya and Fatima claim he has no friends but them and we can totally believe that's what it looks like because the actor, who has built a formidable reputation for perfection, has dedicated the last year or so to Dangal. Few in Bollywood commit so entirely to a role as Aamir Khan does and even for him, the Dangal process has been extraordinary. Part of preparing for the film involved intensive training in wrestling and learning the Haryanvi dialect, in which Sanya and Fatima trained with him.
That they are friends and not just colleagues is fairly clear from the banter on Koffee With Karan, including accusations from the two actresses of Aamir trying to 'steal' their answers to win the hamper in the Rapid Fire.
Video: Watch a sneak peek of Aamir Khan and his Dangalco-stars on Koffee With Karan


Up next, @aamir_khan will be here to wrestle with Karan Johar's personal questions! #KoffeeWithKaranpic.twitter.com/GUWxhzhytI

Dangal, directed by Nitesh Tiwari, stars Aamir Khan as wrestler Mahavir Singh Phogat and Sanya and Fatima as his daughters Geeta and Babita. TV star Sakshi Tanwar is cast as Mahavir Phogat's wife Daya.
The Dangal episode of Koffee With Karan will be aired this Sunday and the film opens the Friday after that.