Koffee With Karan 5: Hey Parineeti Chopra, Sania Mirza Wants You To Have A Boyfriend

Koffee With Karan 5: Farah Khan and Sania Mirza totally upstaged Karan Johar. He was quite jealous of their friendship and felt left out 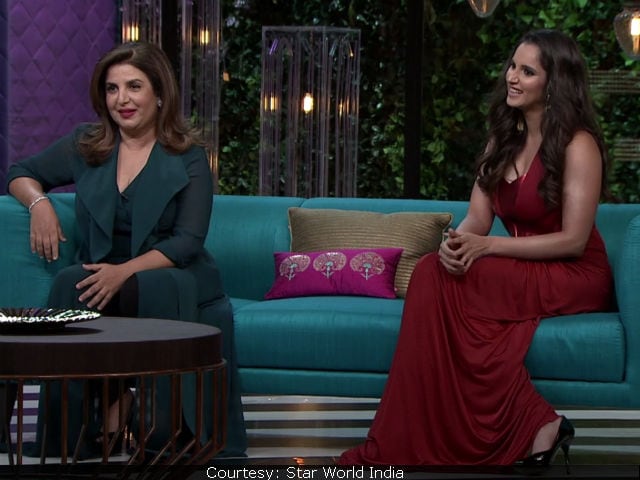 Farah Khan and Tennis star Sania Mirza left Karan Johar in splits and ruled Koffee With Karan's couch. The episode marked Sania's Koffee debut while Farah had been previously been on the show. Farah and Sania's friendship made Karan jealous. In the beginning, Karan asked Sania how it feels to be on his show, to which, she replied, "Amazing." As usual, Farah was at her candid best and said that the last time she appeared on Koffee With Karan, she had to hide her face for five years at parties. Farah and Sania spoke about how their friendship started and how they have grown as friends now. Sania also shared her equation with her husband Shoaib Malik, who resides in Pakistan. She said, "I'm happily married."
Here are some of the highlights from the show:
Sania's 'Short Skirt'
Karan told Sania that she really looks hot in those 'skirts' which she wears while playing.

GIF courtesy: Star World
Farah Khan's Sex Life
Karan- So, Farah how's your sex life?
Farah- Mine is exactly double than that of yours, Karan

GIF courtesy: Star World
Why Didn't You Get Hitched To A Bollywood Actor, Sania?
Karan asked Sania why didn't she dated a Bollywood actor, to which Farah replied that she has.Then Karan remembered that she was rumoured to be dating Shahid Kapoor.
Sania said, "I don't remember." 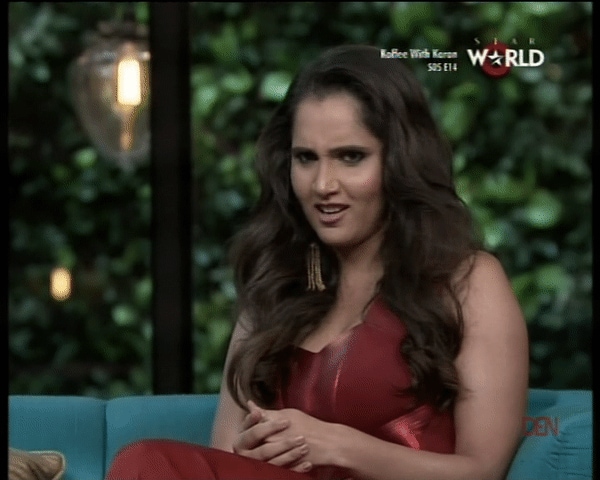 GIF courtesy: Star World
The Rapid Fire Round
The rapid fire round started with grilling Sania Mirza. However, Sania performed well.
When asked about if she wakes up as Parineeti Chopra, what would she do? She says, "I would find myself a boyfriend." She further added that she has asked Parineeti seriously to get a boyfriend.
Farah's round was totally a laughter-riot.
An advice Farah would give to Ranveer Singh
Farah said, "Ranveer should carry a box of condoms everywhere he goes as he endorses a condom brand."
She was asked to express about her thoughts for some films without speaking and Farah totally killed it when asked about Salman Khan's Prem Ratan Dhan Paayo.

GIF courtesy: Star World
No guesses for this one, Farah Khan won the round.
The Koffee Quiz
The Terrible 'Sports' Question From Lagaan

GIF courtesy: Star World
Farah Khan ruled this segment of the show too.
Next up in the queue are Badrinath Ki Dulhani co-stars Alia Bhatt and Varun Dhawan.