Koffee With Karan 5: Mira Rocked The Show Like A Boss. Shahid? Overshadowed 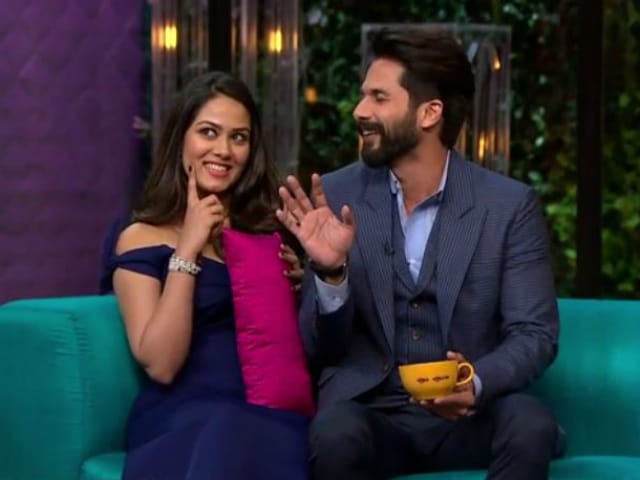 Koffee With Karan 5: A still from the show (courtesy: Star World)

We could not have had a better start to 2017. Those who watched tonight's episode of Koffee With Karan season 5, are nodding in agreement. Shahid Kapoor and Mira Rajput were on the Koffee couch, busy in conversation with show host Karan Johar and some PDA. And what a koffee they brewed! Shahid Kapoor, 35 and Mira Rajput, 22, married in July 2015 and welcomed baby daughter, they've named Misha, on August 26 in 2016. Mira, who is known to be a very private person, is regularly spotted hanging out with Shahid and accompanying him to parties. But Koffee With Karan season 5, episode nine is Mira's first appearance on television, and she rocked the show like a boss. Shahid? Overshadowed.
Want a sip of the koffee they brewed? Read on.
Mira made certain revelations that might have made Shahid a little uncomfortable and shake his head in protest but we loved all of them. When asked about coming to terms with the age gap, Mira went back in time a little and said what her mother actually thought about the marriage proposal from the Kapoor family.
The Misconception
"Shahid was eliminated based on age. My mom thought it was for his younger brother, Ruhan"

GIF courtesy: Star World
Shahid's first reaction when he was told about meeting a girl who's almost a decade younger than he is.
No Way!
"When I was told she was 21 years old, I was like are you insane!"
This is what Mira had to say: "Yeah, my feeling exactly. He's the same age as my elder sister and I call her didi. So I was like I don't think that's going to work"

GIF courtesy: Star World
The air was indeed intoxicated with love, courtesy the mushy couple. And check out Mira's reaction when Karan said that he finds PDA very "annoying.
Love Is In The Air

GIF courtesy: Star World
At one point during the show, Karan said that he likes to hang out with a younger crowd so that he feels young. Mira reflected on Karan's statement and said that now she knows why Shahid agreed to marry a girl who's a lot younger to him.
Mira Has Shahid's 'Strategy' Figured
"I think he married me to stay young"

GIF courtesy: Star World
Karan introduced a new game 'Pillow Talk' and asked Shahid and Mira to place a pillow in between them.
Pillow Talk
Mira said: "No, nothing in between"

GIF courtesy: Star World
Shahid revealed that between Mira and him, the former loves to be in front of the mirror.
Mira Loves The Mirror
"Eventually all women are heroines," said Karan. Shahid's reaction? Priceless.

GIF courtesy: Star World
Finally, Mira on Shahid's "most annoying" habit. Mira 'Burped' Out A Secret
"He burps a lot!"

GIF courtesy: Star World
This was Shahid Kapoor's revenge.
Shut Up Shahid!!
"Mira is a sleep-snorer. She's also like a sleep-taking-blanketer," said Shahid.

GIF courtesy: Star World
Between discussing about being parents early into the marriage and each other's infatuations, Shahid and Mira delivered a brilliant Koffee episode.
We love the new year already!