Koffee With Karan 5: Parineeti And Aditya Spill The Beans 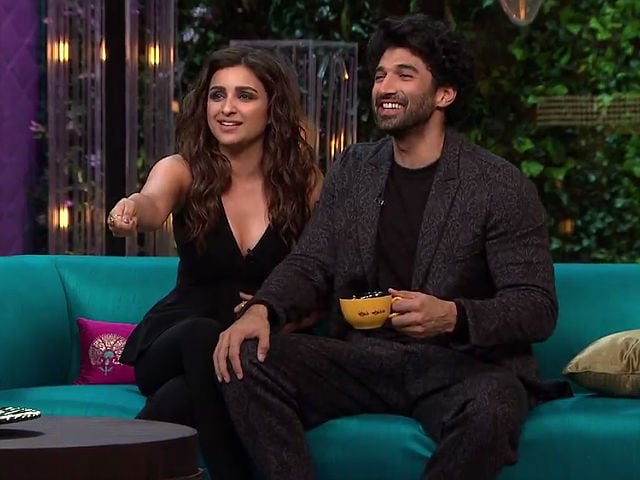 Koffee With Karan 5: Aditya and Parineeti in a still from the show

There are no secrets with Karan Johar and none at all with the viewers of his chat show Koffee With Karan. The latest episode of the show featured Parineeti Chopra and Aditya Roy Kapur, who co-starred in Daawat-E-Ishq, which did not do well for either of their careers. But it was the start of a remarkable friendship and like Karan said, "they are hot and happening but not dating." And as the episode proceeded, we were assured that Parineeti and Aditya have friend-zoned each other. That definitely benefits us , as Parineeti and Aditya had many secrets to share on the show which aired on December 4.
Aditya on Parineeti
#1 Parineeti judges people's character = based on their fingernails
#2 Parineeti does a great english accent - But we got no demo
#3 Parineeti is extremely scared of snakes. "No need for this," she cried
Parineeti on Aditya
#1 Aditya's nefarious affairs, which according to Karan Johar's source, began after midnight but Parineeti added, "That's not true. It's also during the day."
#2 Aditya's mother is a prolific dancer but Parineeti thinks he hasn;t inherited that talent, with the exception of the Dream Team, which she said that Aditya once told her is his coming of age film.
#3 Parineeti had a list of Aditya's annoying habbits, one of which is he doesn't dress very well off screen
Tonight's was the fifth episode of the fifth season of Koffee With Karan. After hosting (in sequence) Shah Rukh Khan and Alia Bhatt, Twinkle Khanna and Akshay Kumar, Arjun Kapoor and Varun Dhawan, and Ranveer Singh and Ranbir Kapoor , Karan Johar invited Parineeti and Aditya.
Together they brewed a fun filled and wholesome Koffee filed with secrets, jokes and tantrums. It was just the way we like.
Next week, Koffee With Karan will air its 100th episode and no less than Salman Khan, who debuted on the show last year, will be on the Koffee couch. His brothers Sohail and Arbaaz Khan, who often collaborate on films, will keep him company. They'll also have secrets to share and coffee beans to spill.
Shahid Kapoor and Mira Rajput too are in the line-up for this season. It will be Mira's first public appearance of sorts as she will feature with her husband on the talk show. Shahid in his many interviews have shared what Mira thinks about him, his films, how they met and other facets of his life, but for the first time we will hear the story first hand from Mira Rajput, a Delhi girl who married an actor, through a match arranged by their parents.
Excited much?