Koffee With Karan 5: Shahid Kapoor And Mira Rajput Give A Perfect Start To New Year

Koffee With Karan 5: Shahid and Mira Kapoor appeared on the show on Sunday. Mira made her television debut as Shahid's wife 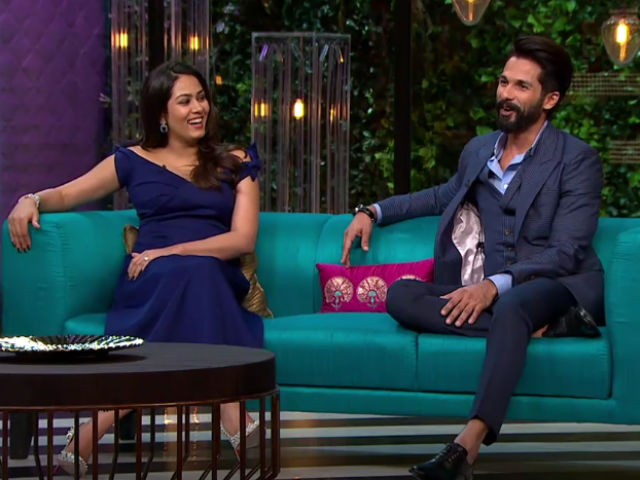 Koffee With Karan 5: Shahid and Mira married in July 2015

Koffee With Karan 5 episode featuring Shahid Kapoor and Mira Rajput made our Sunday. Shahid, 35, has been on every season of Koffee With Karan since it began in 2004 but this was Mira's television debut. For the first time Shahid's fans saw Mira speaking on a showbiz platform and she won everyone with her poise and humour. Karan welcomed the couple with excitement and told Mira, "Shahid has been on the show with all his alleged girlfriends, but it's wonderful to see that he has now come with the love of his life." Shahid and Mira, who got married in July 2015, welcomed their first child, a daughter they named Misha, in August this year.
When Karan Was Shocked To Hear About Shahid's Marriage
Karan Johar revealed that he was shocked to hear that Shahid is getting married. But he also said, "I'm happy that you married someone from outside the film industry."
The Mystery Question
Karan asked Mira to brief about how they got married to which she said, "We met through family. I wasn't told that I was getting married to a movie star. At a family dinner I bashed Bollywood for their item songs and lyrics."
When Shahid Was Eliminated Based On Age
Shahid Kapoor and Mira Rajput, who are 13 years apart, married on July 7, 2015. While the marriage talks between the two families were going on, Shahid was eliminated and Mira's mother thought that the alliance was for Shahid's younger brother.
Shahid, Mira And The Only Question
Before the wedding, Shahid asked Mira, "Why would you want to marry someone who is so older than you." Mira too had the same question.
Shahid: "When I was told she was 21 years old, I was like are you insane!"
Mira: "Yeah, my feeling exactly. He's the same age as my elder sister and I call her didi. So I was like I don't think that's going to work."
No Coloured Hair For Wedding
Mira revealed that she had strictly asked Shahid, who at that time was shooting for Udta Punjab, not to come for the wedding with coloured hair.
Shahid-The Family man
"I had been single for four years and I had looked around. I didn't find anybody in the people around me. I was lonely, I craved to have a family." Now, I'm actually really settled in this marriage now and the age gap really works for us.
When Did They Fall In Love With Each Other?
Shahid Kapoor fell in love with Mira when she got pregnant. We came a lot closer after she became pregnant, said both. Mira added, "That's when the 'I' became 'we'". Mira accepted that now she is "head over heels" in love with Shahid. During pregnancy, there was a time when I did not want him to go anywhere.
When Karan Was Annoyed
The two purposely did a lot of PDA to annoy Karan Johar, who is single.
Shahid and Mira's PDA annoyed on which Mira goes: "Baby..."
Shahid, Mira and the Ex-factor
Karan asked Mira that whether she feels Shahid has carried a baggage of his previous relationships with him. To which, she said, "No, we talk about everything. He knows everything about me, I know everything about him."
Shahid on the other hand said, "I keep discovering about her boyfriends over dinners and lunches with her friends.
Karan: How many boys before Shahid? Shahid didn't give Mira a chance to answer and quickly said, "No less than mine."
Were Shahid's Exes Invited For The Wedding?
"I invited some, but none of them came," said Shahid.
Mira Is Shahid's Version Of 'Normal'
When Karan asked do you think Mira is your version of being normal, Shahid said, "Absolutely. She is everything normal that I was searching for."
The Revelations
Mira said, "He burps a lot, but is a silent snorer." Meanwhile Shahid said Mira was a "blanket snatcher."
What's the last thing you say to Shahid before you go to bed?
"I love you."
Karan ended the episode by thanking Shahid and Mira for the fun-filled episode. He also applauded Mira for being real and a sport, Karan further named Shahid the brand ambassador of the show for featuring in all seasons. The couple delivered a brilliant episode.