Koffee With Karan 5: Shahid Kapoor, Wife Mira And The Ex-Factor 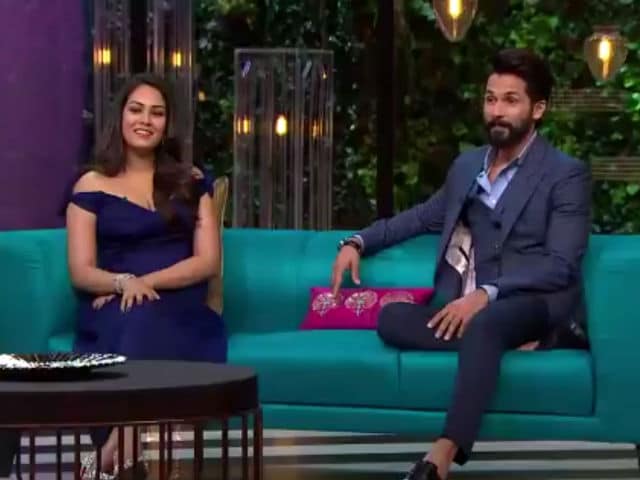 Koffee With Karan 5: Shahid and Mira will appear on the show this Sunday

After a fun-filled episode of Koffee With Karan with Anushka Sharma and Katrina Kaif, we will finally see Shahid Kapoor and Mira Rajput on the show on January 1. Shahid, 35, who has been on all the seasons of Koffee With Karan so far, will share the couch with wife Mira, 23, for the first time. Earlier this month, the actor had shared a picture with Mira from the sets of the show, revealing that they had shot an episode of Karan's show, which, Katrina said last night, many believe is the "gospel truth." A promo of the episode was unveiled on December 25, in which Shahid and Mira are talking about their relationship and their exes.
Video: Watch the promos of Shahid Kapoor and Mira Rajput's Koffee With Karan 5 episode here:


Meet the fun, competitive & madly in love couple of Bollywood - @ShahidKapoor & @MiraRajput, next on the Koffee couch! #KoffeeWithKaranpic.twitter.com/gfAtcq8v9n

Catch one of the cutest couples of Bollywood - @shahidkapoor & @MiraRajput - on their first TV appearance together on #KoffeeWithKaran! pic.twitter.com/Sy6WmAM5Tr

Karan Johar knows what his audience wants to hear on the show and so he asked Shahid and Mira to reveal each other's secrets. In the promo, Karan asked Mira about her boyfriend count to which Shahid instantly replied, "It's no less than mine." The Udta Punjab actor adds that he's still trying to discover his wife's ex-boyfriends. Good for you, Mira.
Here's what Shahid had to say about appearing on Koffee with Mira:

The couple are all set to make some interesting revelations about each other and going by the promos, the episode promises to be spectacular. In a snippet, Karan asked Mira about Shahid's most annoying habit and Mira, hiding her face behind the cushion, replied, "He burps a lot."
Shahid Kapoor married Mira Rajput in New Delhi in July 2015. The couple welcomed their first child, daughter Misha, in August this year.
Shahid's last film was Udta Punjab and he is now filming Sanjay Leela Bhansali's Padmavati, also featuring Deepika Padukone and Ranveer Singh. He will also be seen in Vishal Bhardwaj's Rangoon, co-starring Kangana Ranaut and Saif Ali Khan.