Koffee With Karan 5: When Kareena Kapoor Was Asked Who She's Dating

Koffee With Karan 5: In the sneak peek video of the Koffee show, Kareena and Sonam sip from their cuppas, grill the show host instead and even make him spit out his coffee in a fit of laughter 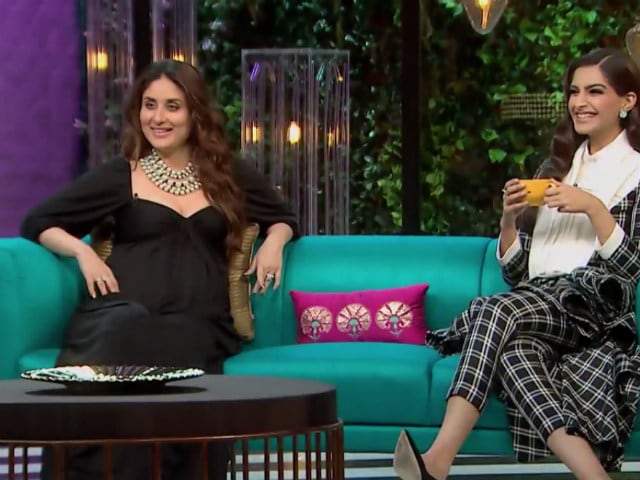 Brew your coffee strong and brace yourselves for an episode of Koffee With Karan with Bollywood style icons Kareena Kapoor and Sonam Kapoor, coming Sunday. Kareena, is married to actor Saif Ali Khan and welcomed a son they've named Taimur Ali Khan Pataudi on December 20, last year. Meanwhile, Sonam Kapoor won Best Actress for Neerja at the Stardust Awards 2017. Kareena is also a Koffee veteran - she has appeared in all the preceding seasons but with different Koffee partners each time. Sonam made her Koffee debut in 2010's season 3, and was back with her father Anil Kapoor in the previous season. A glimpse of the upcoming Kareena-Sonam episode accompanied last Sunday's episode, in which Jacqueline Fernandez and Sidharth Malhotra cooked up a storm.
Sonam and Kareena are co-stars of Veere Di Wedding, also starring Swara Bhaskar. Kareena made headlines for continuing to shoot for the wedding drama through pregnancy. Veere Di Wedding is being directed by Shashanka Ghosh and will is co-produced by Ekta Kapoor and Sonam's sister Rhea.
Moving on, in the sneak peek video of the Koffee show, Kareena and Sonam sip from their cuppas, grill the show host instead and even make him spit out his coffee in a fit of laughter. In an inertia of firing questions, Karan ends up asking Kareena who she is dating. Kareena was prompt: "Me? I'm dating you. Har channel lagado aur Karan Johar a jata hai (Karan Johar appears on every channel I put on)," she says. Well, Sonam Kapoor is also asked about her love life but we'll keep mum and let you decipher what she says.
When asked to rate her contemporaries - Deepika Padukone, Anushka Sharma, Alia Bhatt and Priyanka Chopra, Sonam simply replies: "I'm the best."
Videos: Watch the sneak peek of Koffee With Karan Season 5, Episode 11:


This Sunday, the super glamorous #KareenaKapoor & fashion queen @sonamakapoor are going to set the Koffee couch on fire! #KoffeeWithKaranpic.twitter.com/c6nacIMPsy

Kareena Kapoor, 36, is expected to film the remaining portions of Veere Di Wedding in three more months. Talking about the film, Kareena told PTI: "There has never been a story about women, about four girls. It's not about four sisters. It's the story of four friends. It's about a wedding. It's about my wedding in the film, and my friends."
Meanwhile, this is what Sonam Kapoor, 31, told NDTV: "Veere Di Wedding is not Aisha or Delhi 6. It's more central Delhi more middle class Delhi. People have seen high Delhi society or Chandni Chowk, this film is the Delhi you and I see. It's a cooler younger Delhi society wedding with four girls."
This is the first time that Kareena Kapoor and Sonam Kapoor will occupy the Koffee couch together.
(With PTI inputs)