Koffee With Karan: Kangana Ranaut Can't Help It. She Is Jealous Of Dangal's Success

Koffee With Karan: A glimpse of what to expect from the Kangana Ranaut-Saif Ali Khan episode 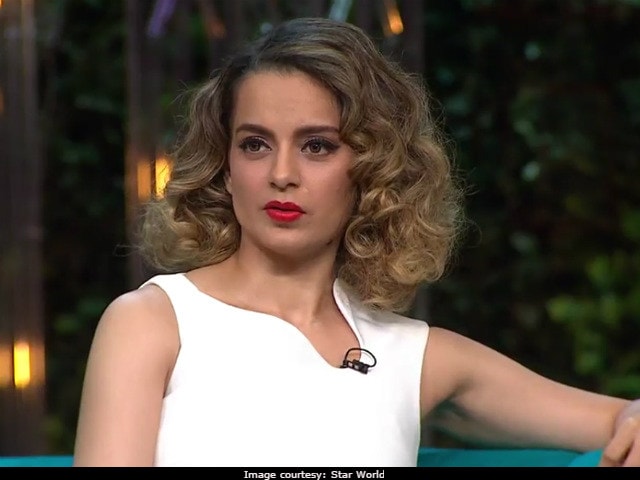 Koffee With Karan: Kangana Ranaut in a still from the show (Image courtesy: Star World)

Alia Bhatt, Varun Dhawan done. Koffee With Karan is now just a week away from another explosive episode, featuring Rangoon stars Kangana Ranaut and Saif Ali Khan. The Koffee sneak peek in Sunday's episode is proof that Kangana and Saif will make it a blockbuster episode - Kangana with her uprightness and Saif with his adorably-confused expressions. Saif also forced (sort of) Kangana to make a confession. "A girl has kissed me!" she said. Vishal Bhardwaj-directed Rangoon also stars Shahid Kapoor, who has already sipped koffee with his wife Mira on Karan's show earlier this year. Meanwhile, Saif's wife, actress Kareena Kapoor made an appearance with Sonam Kapoor in January.
Here's a glimpse of what the sort of conversation to expect from the Kangana Ranaut-Saif Ali Khan episode of Koffee With Karan:
Karan: What's the first thing that attracts you in a woman?
Saif: Hair and eyes, you know...hair on the arms
Saif and Kangana also played Koffee Shots with Karan, in which the participants have to down shots if they have already done the things mentioned in Karan's note card. Kangana wasted no time to gulp down two shots when mentioned 'been jealous of another star's successful movie.' Kangana, who is reputed for being outspoken, explained that she is envious of "the fact that Dangal made so much money...like so much?"
Kangana made show host Karan Johar very, very happy when she addressed him as a 'movie mafia.' Kangana said: "In my biopic, if ever it's made, you'll play that stereotypical Bollywood biggie, who is like you know...very snooty and completely intolerant towards outsiders, flag bearer of nepotism, the movie mafia."
Saif appeared embarrassed and stunned in most of the promo. Find out what he did when asked if he's ever cheated on his partner.


Up next, the Nawab & the Queen are coming to rule on the Koffee couch like never before! #KoffeeWithKaranpic.twitter.com/eB43uXLz4w

Meanwhile, Saif and Kareena welcomed their first child in December and have named their son Taimur Ali Khan Pataudi. Saif was last seen in Phantom while Kangana Ranaut's last film was Katti Batti. Saif Ali Khan, Kangana Ranaut and Shahid Kapoor will work together for the first time in war drama Rangoon, which is scheduled for February 24.