Look Who's Back on Game of Thrones 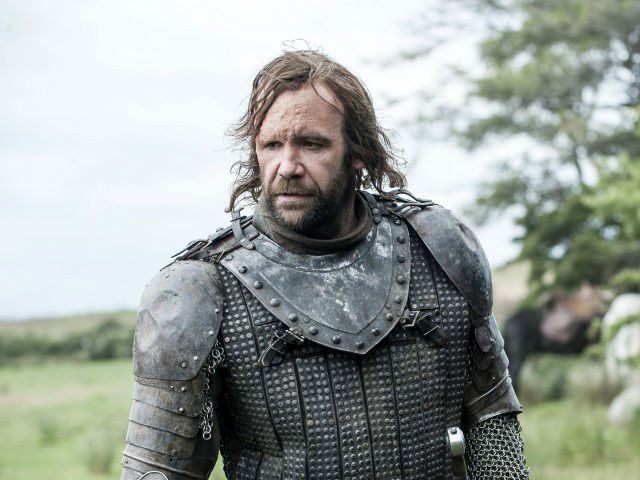 That first scene captures the kind of idyllic society that probably had Game of Thrones watchers wondering if they had inadvertently flipped to the wrong channel. Men and women are working together on some kind of hippie commune in a picturesque verdant mountainside settlement

The Hound's alive! And while, yes, we totally saw that coming, it was still thrilling to see the hulk of a man back on screen.
What could this mean? Will he exact vengeance on his brother, the new and improved Mountain? Will he reunite with his favorite sidekick, Arya? So far, his trajectory is a little hazy.
Avid watchers knew something was up with this episode right away. Rather than launching right into the theme music after snippets from previous episodes, viewers got one scene before the title sequence began. The reason? Seeing Rory McCann's name would have spoiled the big reveal.
That first scene captures the kind of idyllic society that probably had Game of Thrones watchers wondering if they had inadvertently flipped to the wrong channel. Men and women are working together on some kind of hippie commune in a picturesque verdant mountainside settlement.
This is where Sandor Clegane has been living ever since the group's leader (Ian McShane) stumbled upon the Hound on the verge of death where Arya ditched him. Ever since, he has been living among peaceniks, recuperating from nearly fatal wounds and using all that brawn to do more than his fair share of work. His sword-fighting days are apparently behind him, although he can chop logs with a vengeance.
He's also clearly been doing some introspective work. The commune leader - a former warrior who has forsworn violence - says that the gods must have some plan for the Hound. Otherwise, why would he have survived?
The former Kingsguard isn't buying it, though. He has done some horrible things in his day. Remember the butcher's son? That was just the tip of the iceberg.
"If the gods are real, why haven't they punished me?" he asks.
The Hound is not so different from Theon at this point. Both are just shells of their former selves. We're used to seeing the Hound either killing people or unleashing withering one-liners, and we don't get either of those things this episode. But that could change with the right pep talk and a good reason to once again take up arms.
In the case of the Hound, that reason presents itself at the end of the episode. His little slice of life looks delightful, right? And GoT fans know what that means: Benevolent things - and characters - are inevitably doomed.
While the Hound is off chopping wood, the entire commune gets massacred by members of the Brotherhood without Banners. Men, women and children are all dead, shot with arrows, while their leader hangs from a makeshift gallows.
The episode ends with the Hound grabbing an axe and marching off to do what he does best. And while he does chop wood awfully well, we're thinking of something a little bloodier.
---
Video: Here are three things to know from Episode 7 of the sixth season of Game of Thrones, including what to look out for next week.
©2016, The Washington Post
(This story has not been edited by NDTV staff and is auto-generated from a syndicated feed.)