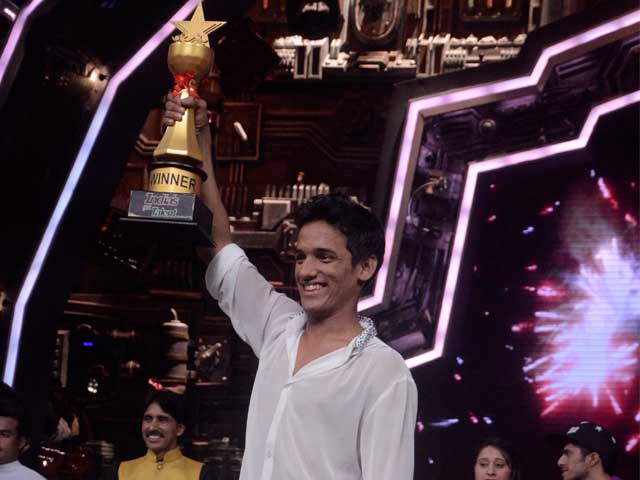 Manik Paul got emotional as he received the winner's trophy

Arunachal Pradesh-based Manik Paul, known for his stunning aerial acts, was on Saturday announced the winner of the reality TV show India's Got Talent.
Along with the trophy, Manik walked away with Rs 5,000,000 and a Maruti Suzuki Celerio car after he looped his way to victory in the finale of the popular TV show's sixth season, which was full of entertainment with dance, drama, rapping and shadow art.
Manik couldn't contain his emotions as tears rolled down his face. His mother too got emotional.
He was announced the winner based on audience votes. The voting line were opened for 20 minutes from 9 pm onwards on Saturday.
Manik was pitted against hand-shadow artiste Prahlad Acharya from Bengaluru, a children's dance group named XIX Dance Group from Thane, another dance group Beat Breakers, gymnast Yogeshwari Mistry who also excelled in aerial acts, and Harmanpreet Kaur and Parry G from Punjab and Jammu and Kashmir, who presented their calibre with a fusion of singing and rapping.
Manik's journey in the show was successful as he carved his way to the top spot with accolades after each of his performance. He stunned audience with his aerial acrobats and also won praise from choreographer Remo D'souza in one episode.
Hosted by comedienne Bharti Singh and actor Sidharth Shukla, the sixth season of the reality show was judged by filmmaker Karan Johar, actress-producer Malaika Arora Khan and actress Kirron Kher.
The show, which brings talent from across India under one roof, went on air on April 18 this year on Colors channel.
Giving an emotional twist to the finale episode, Manik performed on the song Nahin saamne ye alag baat hai from the 1999 Bollywood movie Taal and received a standing ovation from the judges and the audience.
A flashback of the whole season was also screened in a Bollywood movie format with Karan Johar as hero, Malaika as heroine, Kirron as mother, Bharti as hero's sister and Sidharth as the 'lover boy'.
The final episode was made grander with television celebrities joining the finalist for a performance. Manik and Yogeshwari pranced with actress Elli Avram and choreographer Tushar in a surreal performance on Sun saathiya - a rap performance by Raftaar with Parry G and Harmanpreet.
Actor Faisal Khan, who is also a contestant in the upcoming season of the reality TV show Jhalak Dikhhla Jaa Reloaded, performed with X1X and Beat Breakers.
Malaika rocked the stage in a shimmering golden outfit with her energetic moves on songs like Bang Bang and Desi Look.
Sidharth and Kirron danced on songs like Ye raatein ye mausam nadi ka kinara, Aajkal tere mere pyaar ke charche and Darling from the black and white era.
A lot of fun moments were also packed in the episode with Karan Johar taking a fun jibe at Bharti by offering to find a perfect groom for her and calling actors Varun Dhawan and Sidharth Malhotra for the same, who rejected Bharti.
Other highlight of the episode was when Anupam Kher, actor and husband of Kirron Kher, walked on the stage and shook a leg with his wife.
The final episode of the show also presented a glimpse of Jhalak Dikhhla Jaa Reloaded with a clip in which Karan Johar introduced Bollywood actor Shahid Kapoor as the new judge of the upcoming dance reality show.