Matt LeBlanc Said 'How You Doin?' This is How Much Emilia Clarke Blushed

Emilia, who was seated between the F.R.I.E.N.D.S star and actors Kate Beckinsale and Dominic Cooper, admitted that she absolutely loves Mr LeBlanc and added: "I just think you're wicked" 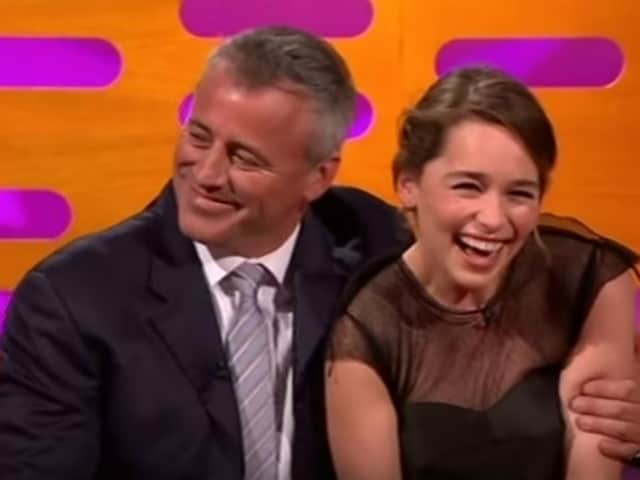 Actress Emilia Clarke had a fangirl moment she is going to cherish forever, courtesy actor Matt LeBlanc on an episode of The Graham Norton Show aired on May 27. Meeting Joey from F.R.I.E.N.D.S left Emilia blushing and giggling in a most un-Khaleesi manner.
Emilia, who was seated between the F.R.I.E.N.D.S star and actors Kate Beckinsale and Dominic Cooper, admitted that she absolutely loves Mr LeBlanc and added: "I just think you're wicked."
Show host Graham Norton quipped: "Emilia Clarke loves Matt LeBlanc!"
When Mr Norton enquired if the Game of Thrones actress chatted with Mr LeBlanc backstage, she could barely form a reply, alternately mumbling and blushing. Mr LeBlanc, now 48, confessed that he doesn't really follow Emilia's Game of Thrones but promised his 'big fan' that he would indeed watch the show. Emilia's big moment arrived when she made a request and 'Joey' obliged.
'How you doin?,' said he. And this is what happened next:

Smooth, Daenerys, real smooth.
Emilia Clarke stars as 'mother of dragons' Daenerys Targaryen in popular fantasy series Game of Thrones and her upcoming films include Me For You and Voice from the Stone.
Matt LeBlanc has now been roped in to co-host auto show Top Gear, the new season of which begins on May 29. Mr LeBlanc starred as Joey in F.R.I.E.N.D.S, which ran from 1994 to 2004. He also starred in a spinoff titled Joey and features as a fictional version of himself on the series Episodes.