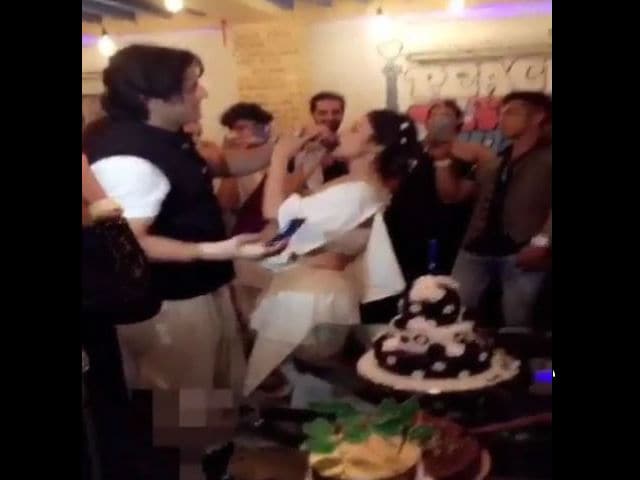 TV actress Mouni Roy rung in her 34th birthday with rumoured boyfriend Mohit Raina and her Naagin co-stars Adaa Khan and Arjun Bijlani.
The Naagin 2 actress, who wore a white toga, can be seen cutting her birthday cake and guess who got the first bite?
Watch the video Instagrammed by a fan. Also note the number of cakes on the table.

Mouni and Mohit met while filming Devon Ke Dev, which first aired in December 2011 and ran for three years. Mohit played lord Shiva while Mouni was seen as Sati in the mythological show.
The video was supposedly posted by Adaa Khan on Snapchat. She Intagrammed some pictures from the birthday bash too. But before that, let's have a look at what the birthday girl shared with her followers. Mouni's chill vibe is infectious.

With the 'bong 'beauties #bangaligirls #friends

Mouni Roy will be seen playing mother and daughter in the second season of Naagin. Actor Arjun Bijlani has been replaced by Karanvir Bohra, who was last seen in Qubool Hai. Naagin 2 is set to go on air from October 8.