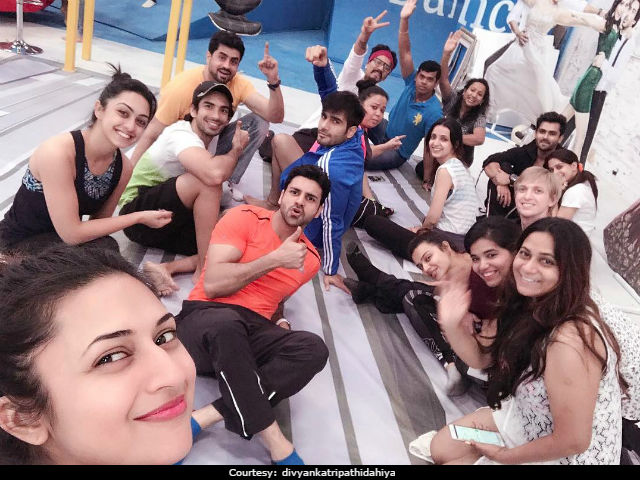 Divyanka Tripathi and other Nach Baliye 8 contestants in one pic (courtesy: divyankatripathidahiya)

Television stars Divyanka Tripathi and her husband Vivek Dahiya are all set to set the stage on fire with their 'rocking' performances on the upcoming dancing reality show Nach Baliye 8. Divyanka, star of Yeh Hai Mohabbatein, roped in her celebrity friends and their partners, including Aashka Goradia and fiance Brent Goble, Sasural Simar Ka co-stars Dipika Kakar and Shoaib Ibrahim, ex Bigg Boss contestant Pritam Singh and his wife Amanjjot, actress Sanaya Irani and actor husband Mohit Sehgal, comedian Bharti Singh and fiance Harsh Limbachiyaa, and also her husband Vivek, for a group selfie which appears to be from the sets of Nach Baliye 8. "Stars at their Simplest Best... Team Nach rocks!" Divyanka captioned the selfie on Instagram. Dressed in casuals, the celebrity contestants flash the victory sign and pose with thumbs up in the picture. Bigg Boss contestant and her husband Vikrant Singh Rajput, who were not part of the selfie, will also be participating in the show.

A post shared by Divyanka Tripathi Dahiya (@divyankatripathidahiya) on Mar 25, 2017 at 1:56am PDT

Meanwhile, Divyanka and Vivek are keeping their fans and followers updated with posts on social media.

A post shared by Divyanka Tripathi Dahiya (@divyankatripathidahiya) on Mar 25, 2017 at 11:03am PDT

Because when something happens, she's the one I want to tell #NachBaliye8

Star couple, cricketer Yuvraj Singh and actress-model Hazel Keech, who married in November last year, have also reportedly been asked to join the show as wild card entries. They will expectedly enter the show on its second week.
The list of Nach Baliye 8 contestants also includes Johar and Abigail Pande, Siddhartha Jadhav and Trupti Akkalwar along with Utkarsha Naik and Manoj Verma.
Meanwhile, actor Ranbir Kapoor has reportedly been roped in to host the inaugural episode of Nach Baliye 8. The new season of the popular dance reality show will premiere on Saturday, April 1. Actress Sonakshi Sinha will be on the judge's panel along with choreographer Terrence Lewis and filmmaker Mohit Suri. Meanwhile, actor Karan Tacker will host Nach Baliye 8.