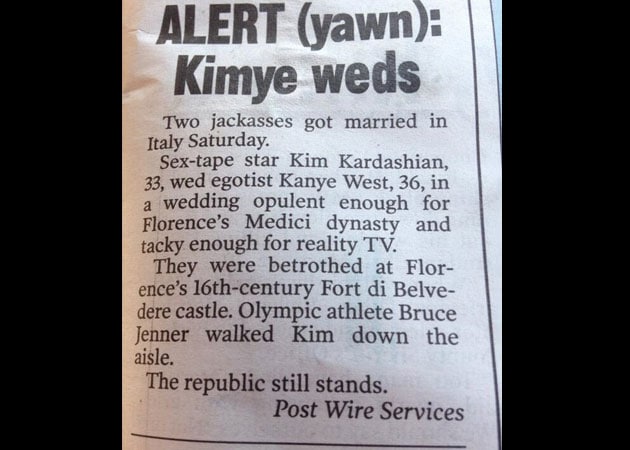 Reality TV star Kim Kardashian married rapper and babydaddy Kanye West in Florence on May 24 and The New York Post published a wedding announcement that directed major hate at the newlyweds.
In a headline calculated to raise laughs, the Post declared it was less than impressed by the couple's grand Italian nuptials: ALERT (yawn): Kimye weds.
In five short sentences, the Post tagged the couple as "jackasses," called Kim a "sex-tape star," Kanye an "egotist" and ended by reassuring the world that "the republic still stands."
The New York Post has dedicated miles of newsprint to Kim over the years, and most headlines featuring her have been unflattering. Sample this: What The Frock? Would someone please tell Kim she's pregnant! (with a picture of an expecting Kim in an outsize dress).
On Twitter, some said the Post's brief announcement was the most hilarious thing ever:

Are there really people THAT concerned with a damn wedding? NY Post coverage says it all... #Kimye#WhoCares

Others said they were needlessly unkind:

This is nothing short of cruel. Let #KimYe live. http://t.co/5z06gtbo0y

Yikes. That NY Post "article" about KimYe seems unnecessarily mean. I hate that THIS is where we are as ppl now http://t.co/6HDI5PPegv