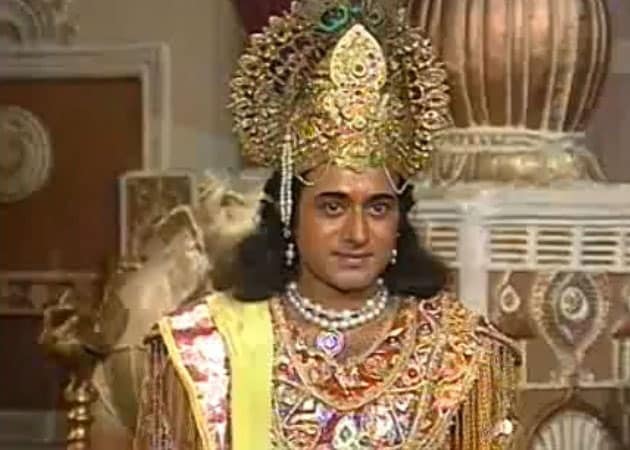 Nitish Bhardwaj as Krishna in a still from B R Chopra's Mahabharata.

He left an indelible mark on the Indian TV viewers when he first played Lord Krishna over 25 years ago in B R Chopra's Mahabharata. Now he will reprise the role in the play Chakravyuh.

He left an indelible mark on the Indian TV viewers when he first played Lord Krishna over 25 years ago in B R Chopra's Mahabharata. Now he will reprise the role in the play Chakravyuh.
Chakravyuh is an offering from Delhi-based theatre group, the Films and Theatre Society, and directed by theatre personality Atul Satya Koushik. When he scripted the play, Koushik immediately decided to cast Nitish as Arjuna's charioteer. (Also read: An Episode From Mahabharata, Recast as Romanian Opera )
The play Chakravyuh will be staged here on Saturday at the Kamani Auditorium followed by a show at Gurgaon on August 3.
"It is almost after 25 years that I will once again pick the flute and get on the stage," Nitish said in a statement.
"I am a bit nervous as I, at no cost, want to disappoint my fans who have for decades showered me with their love," added the actor, who is not new to theatre, he performed in six Hindi and Urdu plays in the late 1980s. (Also read: Buddha - The King Of Kings will impress youth the most, says producer )
Nitish quit his career of a veterinarian to pursue acting, and he was just 23 years old when he was picked up for the epic role of Lord Krishna in Mahabharata, which was aired in 1988.
About choosing Nitish to play Lord Krishna, Koushik, the play's writer-director said, "When I redesigned my original play Arjun Ka Beta as Chakravyuh, the character of Krishna came out really well. While narrating the script to my team, it suddenly struck me that there is no one else but Nitish who can add life to the role."
Apart from his stage comeback, Nitish is also awaiting the release of his Hindi film Yaksha, directed by Mukul Abhyankar in which he plays the title role.