Padma Lakshmi Opens Up About Marriage to Salman Rushdie in Memoir 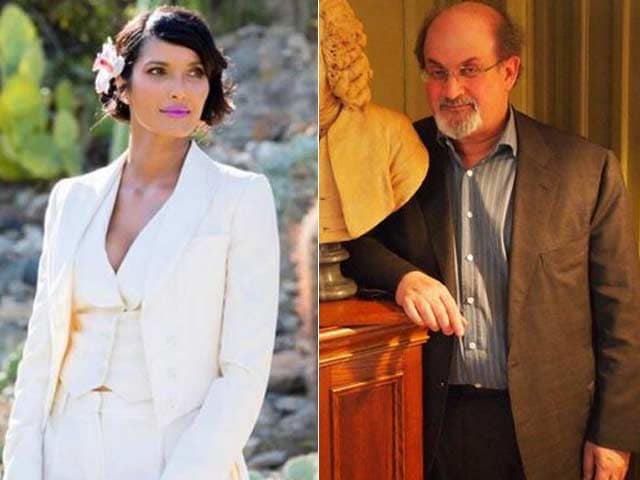 Padma Lakshmi, who described Salman Rushdie as "lethally eloquent", mentioned his reaction after she featured on the cover of Newsweek magazine. "The only time Newsweek put me on their cover was when someone was trying to put a bullet in my head," he had said

Chennai-born supermodel, actress, author and television host Padma Lakshmi opened up about her marriage to Salman Rushdie and shared revealing details in her memoir Love, Loss and What We Ate, which is to release on International Women's Day, March 8, reported nydailynews.
Padma and Man Booker Prize-winning author Salman Rushdie married in 2004, and divorced in 2007.
Padma, who is 23 years younger to the Midnight's Children author, wrote that during her married days, she would often refrain from physical intimacy owing to medical condition endometriosis. To which, Mr Rushdie however, would reply: "How convenient", nydailynews quoted Padma as writing in her memoir. She went on to mention that Mr Rushdie referred to her as "bad investment."
News website nydailynews also reported that she mentioned, soon after her homecoming from a critical surgery, the author left for a trip, and before leaving he said: "The show must go on, after all."
Padma, who also described Mr Rushdie as, "lethally eloquent", mentioned his reaction after she featured on the cover of Newsweek magazine during the second season of Top Chef, which she has been hosting. "The only time Newsweek put me on their cover was when someone was trying to put a bullet in my head," he had said.
Earlier, in an interview to IANS, Padma had also said about her ex-husband: "Now there is somebody who has great wit and is a great flirt. I don't regret a day I spent with Salman, but it was tiring. He has a big life, and it only got bigger when we were together. I'm happy to have stood next to him holding his hand, but we were in very different parts of our lives."
Padma has daughter Krishna Thea Lakshmi-Dell with computer mogul Adam Dell, while Mr Rushdie's marriage to the Indian-American actress was his fourth one.
Padma is also author of books like Easy Exotic and Tangy, Tart, Hot and Sweet, and has hosted Food Network's cook show Padma's Passport. (Also Read: Padma Lakshmi Explains Why the West Thinks of India as 'Complicated')
Love, Loss and What We Ate is slated to release in India on April 15, 2016.