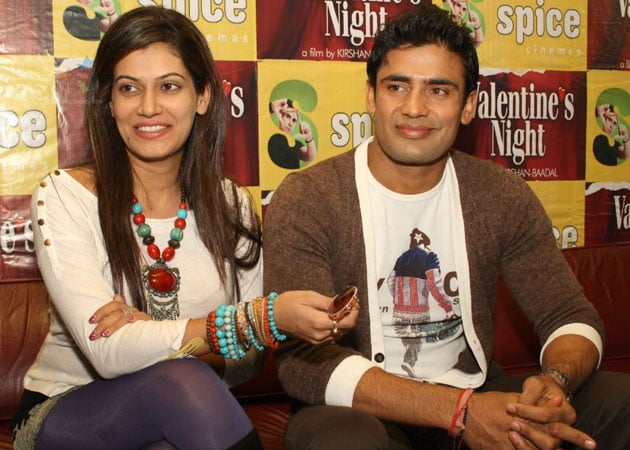 Payal and Sangram have been together for more than two years now.

Actress Payal Rohatgi, whose wrestler-boyfriend Sangram Singh is one of the finalists of Bigg Boss - Saath 7, says she wants him to get the maximum votes and win the reality show.

Actress Payal Rohatgi, whose wrestler-boyfriend Sangram Singh is one of the finalists of Bigg Boss - Saath 7, says she wants him to get the maximum votes and win the reality show. Also, she has a New Year resolution to avoid any fights with him.
"I want everyone to vote for him and I would obviously root for my boyfriend. Please vote for him," Payal said here on the sidelines of a rehearsal for a New Year's Eve performance.
The show's finale will go on air on Saturday. Sangram Singh is competing with Gauahar Khan, Tanishaa Mukherji and Ajaz Khan for the winner's trophy.
Whether he wins or not, Sangram will be happy when he comes out of the show as Payal has a special resolution for 2014 and it is totally in his favour.
"My New Year resolution is I will never fight with Sangram. I always fight with him and he patches up. But this time after living away from him for three-and-half months, I've realized that I can't live without him. So, it's better that I don't fight with him," Payal said.
Payal and Sangram met on the reality show Survivor India in 2011.
Since the last three months, Payal has been concentrating on Sangram's Bigg Boss show. Now, she wants to concentrate on her own career.
"Lots of things (career wise) should happen now because for the last three months I have been concentrating on Sangramji in Bigg Boss. It is a very big and popular reality show, and I was more scared than he was when he was going for it."
"I have been concentrating completely on his show and now I think I should start concentrating on my career also," added the actress, who has been a part of an earlier season of Bigg Boss.