Priyanka Chopra returned to The Tonight Show Starring Jimmy Fallon. This time she plays bob for apples with the host 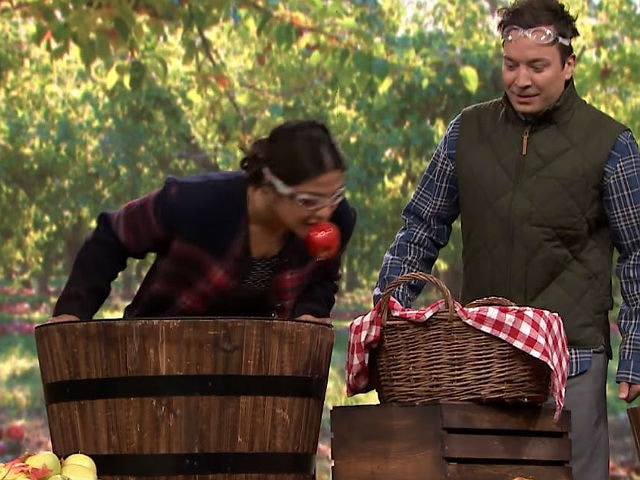 Jimmy Fallon and Priyanka Chopra in The Tonight Show

Actress Priyanka Chopra was back on The Tonight Show Starring Jimmy Fallon and this time it was all about bob for apples than chicken wings. The 33-year-old actress, whose famous American television show Quantico returns with a new season this weekend, also talked about her Emmys appearance, the upcoming season of Quantico, her 'nine passport booklets', and home - amchi Mumbai.
But we're not saving the best for the last. There was an apple bobbing competition where Jimmy and Priyanka took turns to see who can grab the most number of apples using only their mouths. Priyanka won (obviously) and the score was 5-0. She then taught Jimmy how to bob an apple. The result was hilarious:

Now, rewind to the Q&A segment.
Priyanka - The Twirl Emoji
Priyanka made a spectacular appearance at last weekend's Emmy Awards, where she twirled and twirled in a ravishing red Jason Wu dress. "I walked out with this big train (of dress) and I did it for the first time because I was like 'Oh, it's so pretty and I feel princess-y.' And after I twirled once, I was twirling all night. All the photographers were like, 'Can you twirl?' Then even on stage Tom (co-presenter Tom Hiddleston) made me twirl - and I was only twirling. I'm the twirling/dancing emoji now."
Apparently, Jimmy thought so too, because he was ready with a comparative display card:


The emoji is @priyankachopra at the Emmys! #FallonTonightpic.twitter.com/L3V8TFSJJX

Home and New York
Priyanka made her fans very happy when she said that though she's been living in New York for the past three months, she's "not committed" to the city. "I've been filming my show (Quantico) here but I haven't committed to New York yet." When Jimmy insisted she must do so, Priyanka said: "It's commitment phobia. I still say I live in Mumbai although I'm never there."
What happened next will make all Priyanka Chopra fans really, really happy. Fallon asked Priyanka, "So, where's your home?" And she said: "I have a home in Mumbai, I have a home in New York and I have a home in Los Angeles. But I live in Mumbai and work in New York."
Fallon then shared "sandwich" like picture of Priyanka's passports. "I run through one passport in a year. I actually have nine passports, I have five now, because I have valid visas in them, otherwise I run out of papers to stamp."
Agent Parrish Returns
Priyanka plays Alex Parrish in the crime thriller, who was expelled from FBI at the end of season only to be offered a post by the CIA. This Sunday, Agent Parrish starts her journey with the CIA and Priyanka said: "The second season will be epic. Basically Quantico is a show which has terrorism at the middle of it but at the same time there's a lot about love, relationships and friendship."
Watch the interview here:


Interview: @priyankachopra on the Tonight Show with Jimmy Fallon #PriyankaOnFallonpic.twitter.com/78q4Ug9rWU

Quantico will premiere on September 26 in India.