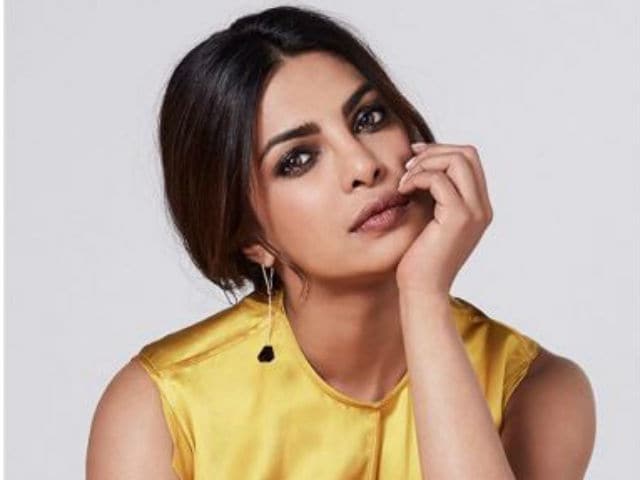 Actress Priyanka Chopra has been nominated for a People's Choice Award for the second year in a row and said on Twitter that she is on top of the world. Priyanka, 34, will be competing in the Favourite Dramatic TV actress category for her performance in Quantico Season 2. Priyanka already has one People's Choice Award, having won last year for her performance in the first season of Quantico, the American network show she headlines.
This year, Priyanka has been nominated alongside actresses Ellen Pompeo, Kerry Washington, Viola Davis and Taraji P Henson. Quantico is also up for Favourite Network TV Drama.
Priyanka Chopra won the People's Choice Award for Favourite Actress in a New TV series last year for her portrayal of FBI agent Alex Parrish in the first season of TV series Quantico.
After the nominations were announced on Wednesday, a thrilled Priyanka tweeted:

Quantico, the American show to be led by an Indian actor, has propelled its star to dizzying heights. Priyanka was placed eighth on the Forbes list of 10 highest-paid TV actresses in the world.
Priyanka also tweeted about the change in the plot of Quantico season 2. The show is reportedly discarding it's focus on terrorism in light of the recent US election.


#Quantico is moving away from its terrorism plot, especially in light of the election, @Anthologist says: https://t.co/jQQv4PCCOq@EWpic.twitter.com/7TNBIh7zR8

Quantico 2, which also stars Jake McLaughlin, Aunjanue Ellis, Yasmine Al Massri, Johanna Braddy, Russell Tovey, Pearl Thusi and Blair Underwood, currently sees Priyanka's character Alex Parrish as a CIA officer after leaving the FBI at the end of last season.
Priyanka Chopra is also awaiting her Hollywood debut with Dwayne Johnson and Zac Efron. The actress will be seen as Victoria Leed, the antagonist in the film, which is set to hit the screens in May next year.