This was Priyanka Chopra's second time on ABC talk show Jimmy Kimmel Live, after she promoted her American TV series Quantico in September, 2015 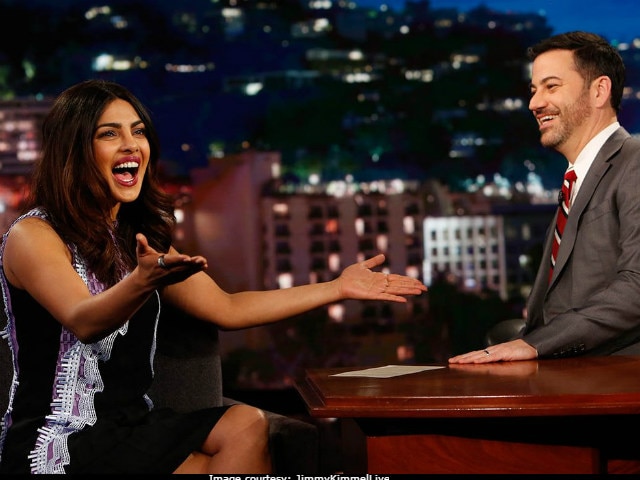 The very hard-working Priyanka Chopra followed up her win at the People's Choice Awards on Wednesday with an appearance on Jimmy Kimmel Live yesterday. This was the 34-year-old actress' second time on the ABC talk show, after she promoted her American TV series Quantico in September, 2015. Priyanka, who won the People's Choice Award for Best Dramatic TV Actress, told her host about the injury she suffered last week while filming Quantico and said it felt like she was on Grey's Anatomy. As revealed by a behind-the-scenes picture, Priyanka was accompanied to the studio by her mother Madhu Chopra who, she explained, flew to New York after Priyanka's injury.
Last weekend, Priyanka was taken to hospital after falling on the sets of Quantico. She was treated for concussion and later tweeted that she was looking forward to resuming work. "I fell, I hit my head on the road. They took me to the ER, they told me it was a concussion," Priyanka told Jimmy Kimmel. "Was this a real doctor or a TV doctor? Is this like Grey's Anatomy?" he wanted to know.
"In my head I was a part of Grey's Anatomy. Because I landed there and people took me in this wheel chair and I was seeing lights because I had to lie down and I was feeling like it was really Grey's Anatomy," Priyanka said. It's a badge she'll wear with pride. "You see stars and it's not fun. I got dizzy, but it's my first concussion too so I was very star struck about it. It was quite an achievement for someone who does their own stunts," she said.
Priyanka Chopra also neatly dodged Jimmy Kimmel's opening question of "Do you know you are gonna win before you go the People's Choice Awards? Because it seems like people who will lose are never there are and people who'll are always there."
Video: Watch Priyanka Chopra in Jimmy Kimmel Live

Priyanka's co-guests this year were actress Megan Mullally and singer Maren Morris. She was on the show last year with Jimmy Kimmel's nemesis, actor Matt Damon.
Quantico is currently in its second season and is keeping Priyanka Chopra occupied in New York. She headlines the show as FBI recruit-turned-CIA-agent Alex Parrish. Priyanka made a quirky reference to her accident on the sets of Quantico in her acceptance speech at the People's Choice Awards, where she won for the second time. She looked stunning in pale peach separates at the awards gala.

Back home, Priyanka Chopra will appear on the next episode of Koffee With Karan.