Priyanka Chopra Vs Jimmy Fallon In Holi Fight. Who Won? 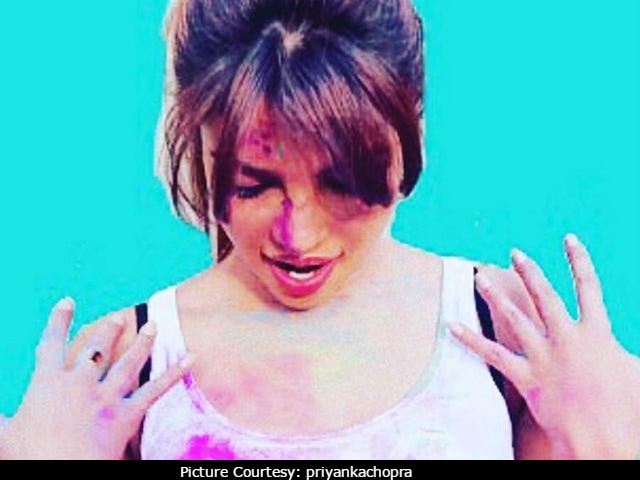 Bura na mano, Jimmy Fallon, Holi hai. Actress Priyanka Chopra recently appeared on The Tonight Show Starring Jimmy Fallon for the third time and definitely came off better in a Holi fight with her host (who should be used by now to losing battles to Priyanka - remember the chicken wing eating contest?). Priyanka Chopra tweeted about her experience of playing Holi with Jimmy Fallon and said, "My favourite part besides your shocked face after I got you wit a big blob of face paint." The Bajirao Mastani actress also shared a picture of her colourful self on Instagram, with the caption "Happy Holi with Jimmy Fallon tonight!! You should see what he looks like!" The 34-year-old actress later re-posted a picture of Jimmy Fallon caked in colour. She captioned the image "And a happy Holi to you too Jimmy Fallon I'm a little less homesick now! I got u good... again!!" The show, starring Priyanka Chopra, will be telecast on March 14.
This is what Priyanka tweeted


Jimmy and @PriyankaChopra have an impromptu Holi celebration! #FallonTonightpic.twitter.com/NuWVzZi7y9


Happy Holi with @jimmyfallon tonight!! U should see what he looks like! Lol Tune in tonight at 11:35 EST


And a happy Holi to u too @jimmyfallon im a little less homesick now! I got u good... again!! @jimmyfallon with @repostapp Happy Holi!!!!

Apart from celebrating the festival of colours on Jimmy Fallon's show, Priyanka Chopra also hosted a Holi party for her family and friends at her apartment in New York. Priyanka captioned a picture: "Happy Holi with the family and team. The white in my house is all colourful now! NYC Holi #homesick," adding, "Laughter is the best medicine!"


Happy Holi with the family and team. The white in my house is all colourful now! #nycHoli #homesick

Laughter is the best medicine! Another one! Yay for selfie sticks! #happyholi

Priyanka Chopra is currently busy shooting for the second season of American TV series Quantico in New York and will make her Hollywood debut with Baywatch, also starring Dwayne Johnson, in May. Earlier this year when she appeared on chat show Koffee With Karan, she said that she intends to also sign a Bollywood film this year. Priyanka's last appearance in a Hindi film was 2016's Jai Gangaajal. She is now a regular on international red carpets and was spotted this year at the Oscars, Golden Globes and the People's Choice Awards, where she won her second award for Quantico.