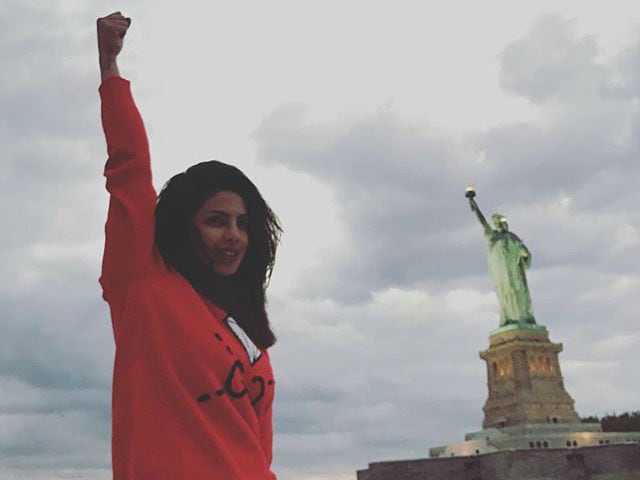 This image was posted on Instagram by Michael Desante

Priyanka Chopra must be having to blow off some steam after taking care of the bad guys on ABC's Quantico. But it's hard to believe that the actress, who has possibly been everywhere and done all that, is doing everything touristy in her current residence, New York.
Priyanka, 34, is currently making International news with her every move, and after making it to New York Post, presenting at the Emmys and an alleged link-up with Hollywood star Tom Hiddleston, we see her letting her hair down with friends.


So much fun being a tourist with you @jazmasri I'm proud of u. #celebrations #nofilterneeded #girlsdayout


Lol! We r all statues of liberties ! Boat ride along the Hudson. I'm in a New York State of mind.. @jazmasri @chopramm2001 @mdesante

The actress, who recently appeared at the Global Citizen Festival in New York, has been chilling and relaxing with friends.

But she took some time out for a spa date with mom Madhu Chopra.

Priyanka will next be seen in Baywatch alongside Dwayne Johnson, where she will take on the role of antagonist. Meanwhile, the second season of her police-drama Quantico, in which she plays CIA-agent Alex Parrish, has premiered recently with rave reviews.
She may not be moving there permanently, but Priyanka's New York Diaries are nonetheless envy-inducing. Recently, she announced the arrival of fall in the Big Apple on Instagram. But the feisty actress isn't a delicate darling, as she proved by her hard-core action moves on actor Jerry O'Connell on television chat show Live With Kelly, that too in high heels, later the same day.
Too much, Priyanka. You definitely deserve this time off.