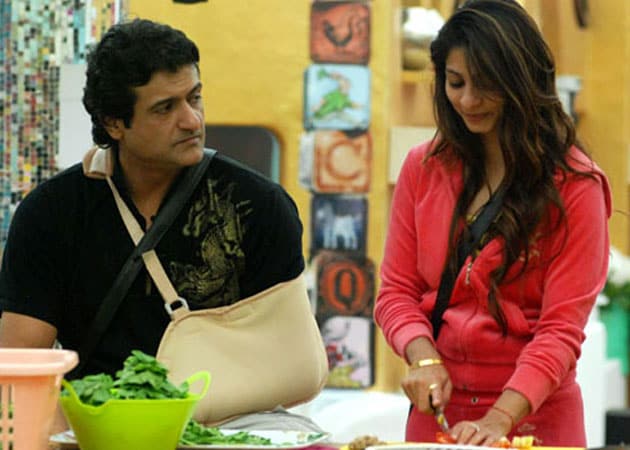 Armaan Kohli had said he has found a life long friend in Tanishaa.

Well-known television journalist Rajat Sharma, who conducted a mock-trial of the finalists, says, "Armaan, Tanishaa's relationship is for real."

It is being said that Armaan Kohli and Tanishaa Mukherji were faking their romance on Bigg Boss 7 to get viewership. But well-known television journalist Rajat Sharma, who conducted a mock-trial of the finalists, says the relationship is for real.
"One can fake it for a while. But when numerous cameras are watching you constantly, you are bound to show your true feelings. No, I don't think they're faking it." said Sharma, who visited the house last week.
This was Rajat Sharma's first appearance on the Colors' reality show, doing what he is famous for - grilling celebrities. He enjoyed the experience.
"One can't dispute the success of Bigg Boss. It is watched by every section of the audience. I am not a regular viewer of the show. But when I was invited to do my Aap Ki Adaalat on Bigg Boss, I did my research on the six contestants, as I do on all the celebrities who I question on Aap Ki Adaalat." he said.
Bigg Boss finale is on Saturday and Tanisha Mukherji, Gauahar Khan, VJ Andy, Ajaz Khan and Sangram Singh, who were grilled by Rajat Sharma along with Armaan Kohli, are vying for the big prize.
Rajat Sharma is impressed with the work put in by the Bigg Boss team. "There are 500 people working round the clock. These are people who know their jobs, and this is a show that knows its mind."
He wouldn't mind going back to the show if called again.