"The episode was great, I had a lot of fun, all our responses were befikre, you will see it when it is aired. It was a lot of fun though," said Ranveer Singh 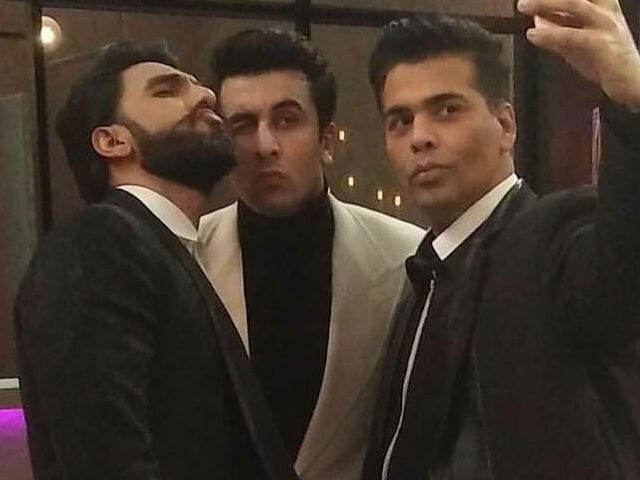 All too often, I've mixed their names up, wrongly addressing Ranveer as Ranbir - replacing the V with the B, leaving me tongue-tied and red-faced. Now, it seems that this twain has met, on Karan Johar's Koffee couch.
In July, Ranveer Singh and Ranbir Kapoor - the similarly named men of this piece - were spotted dancing to Badtameez Dil at a party hosted by Karan Johar. Now, as per this tweet from the filmmaker, they are all set to serve up a potent brew.
Behold, an episode of Koffee With Karan in the making:


This is what happened today!!! #koffeewithkaranpic.twitter.com/zZZHuaVHiB

At the launch of the Befikre song You And Me, we asked Ranveer, 31, how 'befikre' he was while handling Karan's questions on the shoot.
"The episode was great. I had a lot of fun, all our responses were befikre. You will see it when it is aired, it was a lot of fun though. I must admit I has a blast with the two of them," Ranveer said.
On what beans they will have been asked to spill, your guess is as good as ours but we hope the answers will be as befikre as Ranveer claims as both actors do have a lot in common.


More shots of Ranbir Kapoor and Ranveer Singh on #KoffeeWithKaranpic.twitter.com/SFTbPNvrmJ

Meantime, it seems the Censor Board has also been uncharacteristically Befikre about clearing Ranveer's film - the famously sanskaari Board apparently didn't purse its lips in disapproval despite the 40 or so kissing scenes (yes, we are counting) it contains. The Aditya Chopra-directed Befikre has been cleared without a single cut.
This made Ranveer Singh a happy man, claiming 'family film' status for Befikre. The actor said, "The film is desi. There's an attempt to show the kiss in a very different way, with love laughter. No one can be offended by that. It's difficult to watch some films with kids but this is not one of those and the Censor has agreed to that, it's a family film."

Ranveer, who is in prep for Sanjay Leela Bhansali's Padmavati, says that after Bajirao Mastani (also made by Mr Bhansali), Befikre was just the kind of film he wanted to do.
Befikre, co-starring Vaani Kapoor, heads to the Dubai International Film Festival and hits screens on December 9.