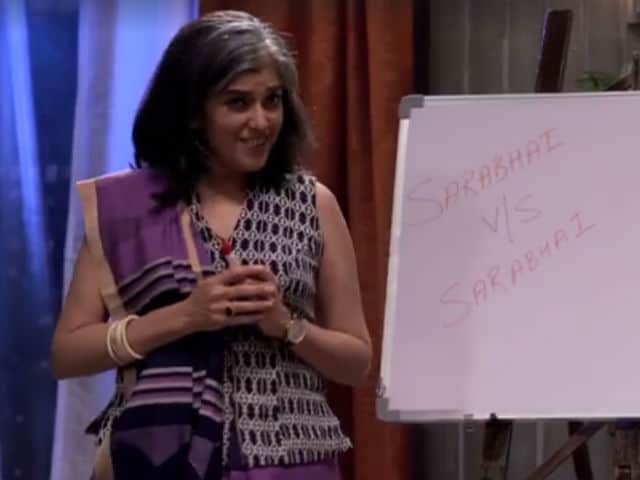 Ratna Pathak Shah in a still from Sarabhai Vs Sarabhai (Courtesy: Hotstar)

The popular television show Sarabhai Vs Sarabhai is all set to return as web series after a gap of 11 long years. Mark your calendars, the show will start airing from May 16. The original star cast Satish Shah, Ratna Pathak Shah, Sumeet Raghavan, Rupali Ganguly, Rajesh Kumar, Deven Bhojani and Arvind Vaidya will be making a comeback in the web series. The rivalry between Maya Sarabhai (Ratna Pathak Shah) and Monisha Sarabhai (Rupali Ganguly) is one of the main highlights of Sarabhai Vs Sarabhai, and we absolutely love the saas-bahu tiff. Ms Shah, who has her own charisma and panache on the show, says she is just opposite her character in real life. "I am happy to be Maya, but let me tell you I am equally Monisha in real life," she told The Times Of India.
"I can absolutely understand why Monisha washes her plastic, paper cups and reuses them. I also do them at home," she quipped.
The trailer of Sarabhai vs Sarabhai was launched last month.

Of her comeback on the show, the actress told TOI , "Nobody writes a show like Sarabhai Vs Sarabhai, a show which is progressive in thought doesn't stretch like a rubber band and has interesting characters. Tell me another show on TV or web which has any of these. I rest my case."
The Lipstick Under My Burkha actress says that her husband, actor Naseerudin Shah is equally thrilled with Sarabhai Vs Sarabhai's comeback and 'hopes' that her family likes it.
Ratna Pathak Shah believes that the audience will definitely love the show. "Before starting the shoot we all watched the episodes. I personally watched episodes with the purpose of preparing for the role, but all I did was just laughed and laughed. That's when I realized that if I can have so much fun watching myself on screen even after 10 years, the audience's will definitely love it," she told TOI.
Ratna Pathak Shah, last seen in Kapoor and Sons, will next feature in Aneez Bazmee's Mubarakaan, which stars Arjun Kapoor, Ileana D'Cruz and Anil Kapoor.