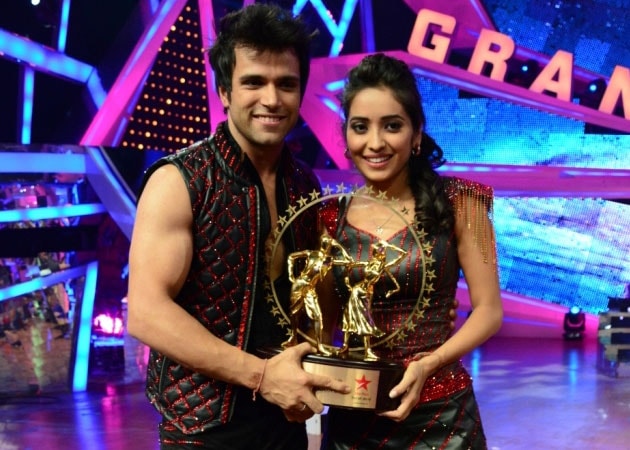 Rithvik and Asha pose with the trophy

Television actors Rithvik Dhanjani and Asha Negi won the sixth season of celebrity dance reality show Nach Baliye on Saturday. The couple have been a part of the show since the beginning and have been giving spell-binding performances.
The winning couple was awarded the official Nach Baliye trophy along with Rs 35 lakh, a trip to Australia and a Renault Duster SUV.
While Rithvik jumped with joy, Asha shed tears of happiness.
"We had put in our best in every performance and had a clear goal of winning right from day one. However the competition was very tough and it only pushed us to try harder with every episode. Needless to say, this would have not been possible without my Baliye. The sweat and tears shed was all worth it," said Rithvik.
The winning choreographers Vibhav and Bhavana were awarded Rs 5 lakh.
The show started with 11 couples initially and the other couples who were contesting for the trophy included Debina Bonnerjee-Gurmeet Choudhary, Vinod Thakur-Raksha Thakur, and Ripudaman Handa-Shivangi Verma.
The finale was a grand extravaganza with performances by all the contestants of the season in different groups.
Actress Shilpa Shetty, who co-judges the show along with filmmaker Sajid Khan and choreographer Terence Lewis, performed a fabulous aerial act on Pani da rang from the film Vicky Donor, Ram chahe leela from Ram-Leela and Dhating naach from Phata Poster Nikhla Hero.
Terrence put on a saucy act on Lahu muh lag gaya while Sajid performed to the tunes of an amalgam of songs from his movies.
The couples were joined by Dimpy Ganguly and Suhasi Dhami who were present and even performed at the finale.
The finale also saw Shaadi Ke Side Effects stars Vidya Balan and Farhan Akhtar shaking a leg on the show.