Shabana Azmi On Amma And The Evolution of Indian Television

"In America, if we see the numbers of shows being made and the scale of those shows, then you can see a big revolution in the TV medium, where it is going to take over completely. That's why I did this show," said Shabana 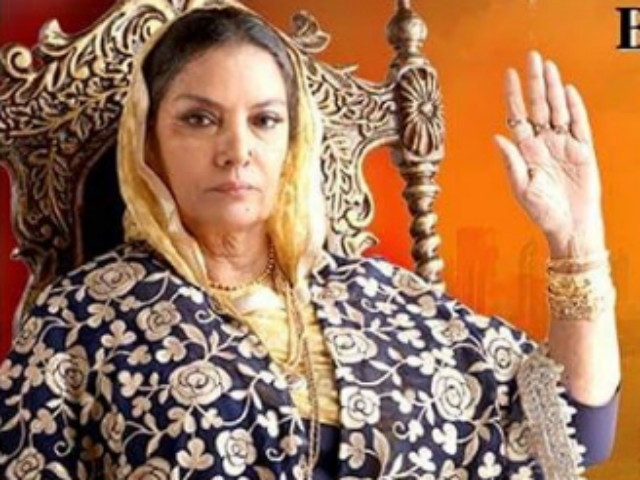 Shabana Azmi in a still from Amma

Veteran actress Shabana Azmi, who will next be seen as Zeenat in Ek Maa Jo Laakhon Ke Liye Bani Amma, says she decided to be a part of the popular TV show because in today's time television is offering a variety of roles to actress irrespective of age.
"It's a really good time not only for me but for Indian cinema too. In today's time, all types of films are being made - like mainstream cinema, middle of the road cinema and art house cinema," Shabana said on the set of the Zee TV show on Wednesday.
"Before this show, I was shooting in Chicago for an American production. The world has opened up for actors, who are getting all types of roles," said the actress who believes that as a medium, television is evolving.
"The biggest change is that if you look 15 years back, a woman's career used to end after the age of 30. Then she could only become a sister-in-law or a mother."
"But now women are getting a variety of roles. I have recently tried comedy. It's a good time for me to be here. Right now I am doing an English film, an American film and have also recorded two songs for Aparna Sen's film Sonata," Shabana added.
In a career spanning over four decades, Shabana has portrayed each and every kind of character and has proved her mettle in the entertainment industry by her versatile acting in films like Ankur, Arth, Khandhar, Paar and Godmother.
In Amma, Shabana will take over the reigns from actress Urvashi Sharma, after the show will take a 15 year leap on Saturday.
"Right now it's a busy time for me. I became a part of Amma because of Aasif Sheikh. This role allowed me to do something. Television, which is currently witnessing a change, is tomorrow's medium," said Shabana, who was earlier seen on TV in a cameo in Anil Kapoor's 24.
"In America, if we see the numbers of shows being made and the scale of those shows, then you can see a big revolution in the TV medium, where it is going to take over completely. That's why I did this show," she added.
The show chronicles the journey of an ordinary mother, Zeenat, deserted by her husband during the Partition, the harsh challenges that she faces thereafter and her resilient bounce-back to emerging as a beacon of hope and leader for the masses.
Talking about her character, Shabana shared: "Zeenat is a villain for some people and heroine for others. It's a Robin Hood kind of character, who takes from rich and gives it to the poor."
Married to veteran writer and lyricist Javed Akhtar, Shabana feels it is important for actors to explore every medium.
"I have done films and theatre. But TV is something I am doing first time as in lead. It's an important phase in my life," she said.
Any particular type of role she wishes to portray onscreen?
Shabana said: "I would love to play a historical character. When we play such types, there we have emotions - how that character must be behaving."
"In India, we don't have archival material. When we play a historical character, then we take inspiration from other historical films. I think it would be challenging to do in-depth search of the character that I get to play. I would love to do that."
Apart from her, the show will also feature Yuvika Chaudhary and Ashmit Patel post the leap.
(Except for the headline, this story has not been edited by NDTV staff and is published from a syndicated feed.)