Shah Rukh was in shades of grey but Alia owned the suited look in a white pantsuit. With those stilettoes and unkempt hair, Alia is the star of the night. Clearly 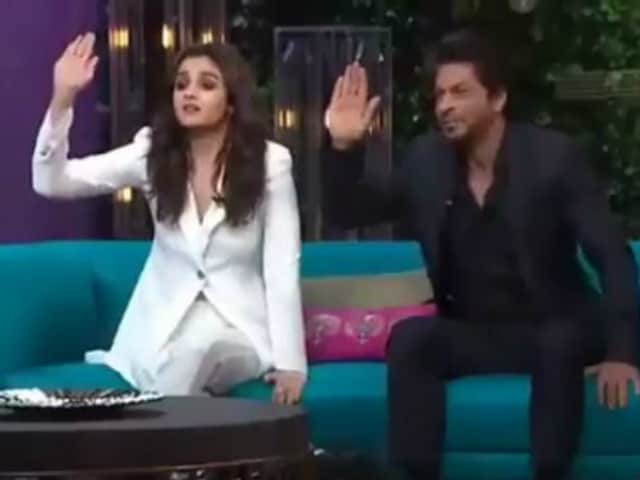 A still from the promo of Koffee With Karan.

The world is eagerly waiting for Dear Zindagi co-stars Shah Rukh Khan and Alia Bhatt to arrive on Karan Johar's talk show Koffee With Karan tonight. Alia, who is clearly in mood to tease, Instagrammed a picture from the sets that will only cater to your 'can't-wait-any-longer' feeling.
Shah Rukh was in shades of grey but Alia owned the suited look in a white pantsuit. Smart. With those stilettoes and unkempt hair, Alia is the star of the night.

Merely hours before Koffee With Karan season 5 debuts on TV, Karan's Dharma Productions shared pictures from the chic and plush sets and the green room:

Shah Rukh and Alia shot the episode in October end. This is how we know:


Some work days r not work. They r love and happiness. Thx Koffee team for having me over. Have a great season again! pic.twitter.com/g46B9hXI7z

It's not surprising that the host was ahead of his first guests - he joined the sets in September:

Meanwhile, the Parineeti Chopra and Aditya Roy Kapur were also spotted sipping Koffee with Karan. Next episode, may be?

Koffee has been had!! It was no filter and extra strong !! The show should be renamed #GossipWithKaran but all is fair in love and rapid fires :) @karanjohar #AdityaRoyKapur

Guests were last seen on the coffee couch with a Parineeti-Alia episode on April 6, 2014 while Best of Koffee With Karan Season 4 aired later that month.
Directed by Gauri Shinde, Shah Rukh Khan and Alia Bhatt's Dear Zindagi releases on November 25.