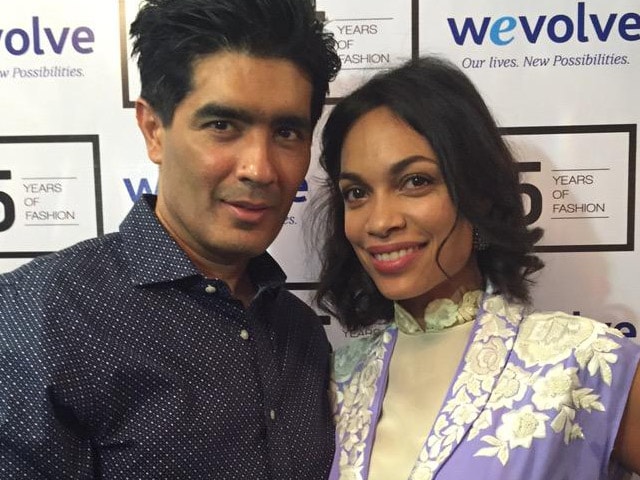 This image was posted on Twitter by Manish Malhotra

Rosario Dwason, who came to be part of this show, was styled in a midnight blue crop-top teamed with a voluminous rose-pink lehenga skirt

Hollywood actress Rosario Dawson of Sin City fame was the center of attraction at the Lakme Fashion Week spring-resort 2015 edition when she attended a 'show with a cause' by ace designer Manish Malhotra.
He showcased his 'The Blue Runway' collection at the gala.
The show, held in Mumbai on March 18, supported a global campaign aimed to empower young men and women to challenge norms that lead to gender violence.
Rosario especially came to be part of Manish's show, through which the designer introduced a new dimension to his summer collection with a social message of change, in association with the WEvolve Campaign and World Bank as a partner.
"In the span of my career, I have had the opportunity to meet and work with some incredibly strong individuals - many of them women. It is unfortunate that a section of society takes femininity as a sign of weakness. I strongly believe that foundationally strong education and value systems are the only way to eradicate this notion," Manish, who has worked with some of the best names in the film world, told IANS.
He believes that "fashion speaks a universal language and it is a great tool to talk about the issue".
"By creating The Blue Runway Collection and talking about the inspiration behind it, I hope to give the cause a voice," he added when asked about the fashion industry's role in helping to eradicate social atrocities against women.
His show saw the launch of the WEvolve campaign, and it was rightfully attended by women who've made a mark.
Styled in a midnight blue crop-top teamed with a voluminous rose-pink lehenga skirt from the designer's latest collection, Rosario was present to support the cause.
Bollywood's powerful ladies brigade was represented by names like Deepika Padukone, Jacqueline Fernandes, Shabana Azmi, Sridevi, Kajol, Huma Qureshi, Neha Dhupia, Richa Chadda, who graced the front row.
The show featured models walking the ramp amidst a set of floral decor with Moroccan lamps hanging from trees. The highlight of the show was the finale segment where the models were seen carrying messages of change and positivity on placards that read -gender, equality, society, empower and justice.
Also, for the first time in Malhotra's association with LFW, the show was an offsite one in the old-world ambience of the Great Eastern Home - a sprawling home decor store featuring unique and worldly furniture.
"The celebration of LFW's 15 years and support for a cause requires that the show be special. The Great Eastern Home is a quiet haven in the middle of Mumbai's chaos - much like the juxtaposition of the calm of The Blue Runway Collection against the issue that it addresses," he told IANS.
His designs showcasesd mirror work and floral embroidery, adding a 3D and textural effect. The outfits were highlighted with jewellery by Anmol Jewellers. While inspired by traditional techniques, the collection is innovatively designed to be worn in any part of the world.
The women's line included flowy gowns, jacket-saris, off shoulder and halter crop tops, and skirts as an ode to the lehenga. Since the show was about empowering women by empowering men, Malhotra lent a strong focus to his men's collection with tailored menswear that included bandhgala jackets and long shirts in structured and easy styles.
With the range, Manish also brought together a youthful and glamorous collection to celebrate the younger generation, which according to the designer is the key agent of change.
What's more is that for the designer 2015 is a "special year" for him as it marks "25 years as a costume stylist and 10 years of my label Manish Malhotra".