"And we've had the same struggles in terms of dealing with body image and puberty and growing up in the public eye. But I found my strength in her, and I think she found her strength in me," said Sophie Turner 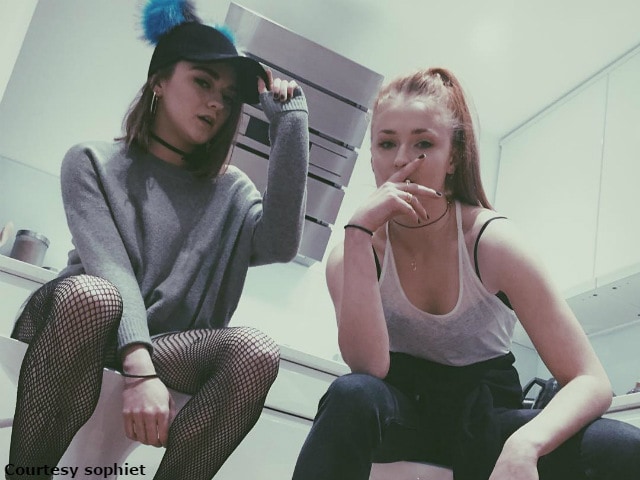 The new season of Game Of Thrones is round the corner. Meanwhile, actress Sophie Turner opens up about her rapport with co-star Maisie Williams, who features as her feisty sister in the fantasy drama series. Describing their journey, on and off the show, Sophie says, "This has been amazing and hard," reported InStyle. Maisie and Sophie came on board for Game of Thrones when they were 13 and 15 respectively - that is when Game Of Thrones debuted in 2011. Featuring as the estranged sisters of the celebrated Stark family of Winterfell, Sophie and Maisie have clocked six years of association now. Speaking of which, Sophie tells InStyle, "To have someone who understands what you're going through, who's the same age, who came from pretty much the same background-that is so rare."
Of growing up together - which is also a reflection of their on screen characters - Sophie says, "And we've had the same struggles in terms of dealing with body image and puberty and growing up in the public eye. But I found my strength in her, and I think she found her strength in me," reported InStyle.
Meanwhile, Sophie Turner and Maisie Williams are all set to reprise their roles in Game Of Thrones Season 7. The show got fans and followers excited after it was revealed that the new season premieres in July. Singer Ed Sheeran is prepped for a cameo, in which he will share screen space with Maisie.
The sixth season of Game Of Thrones wrapped with Arya Stark, heading to Kings Landing to avenge the death of her family members. However, the new season is crucial for the two sisters as Arya is oblivious that Sansa is also headed for Kings Landing and so is their brother Jon Snow, a character famously played by Kit Harington.
The new season promises an epic battle for the throne between Cersei Lannister, Daenerys Targaryen and Jon Snow.