"All these kids are brilliant and I am amazed at their talent. At their age, they are so smart and good with their singing. My only advice for them is to keep practicing and they will reach where they want to," Amit Kumar said. 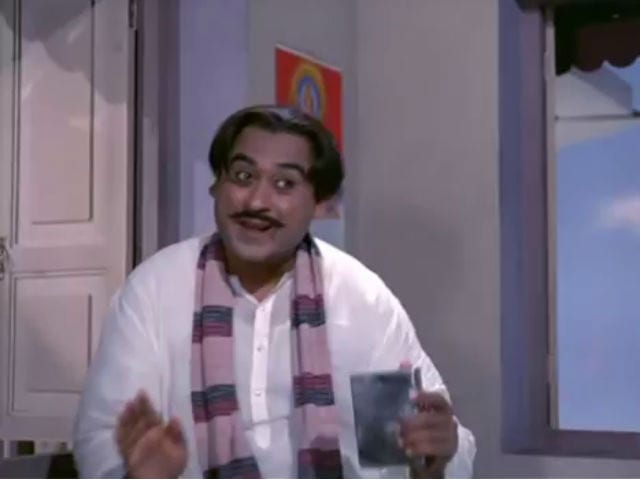 A still from film Padosan

Kishore Kumar was an inspiration to all, popular singers Neeti Mohan, Shekhar Ravjiani and Shaan have said in a tribute to the Indian cinematic legend ahead of his 87th birth anniversary which falls on August 4.
While remembering him, Shaan, Shekhar and Neeti, who appear as mentors on children singing reality show The Voice India Kids, sang some popular songs and played Antakshari with contestants of the show.
"It's wonderful to share Kishoreji's songs with the children as it is important for them not only to sing today's songs but also remember all-time classics as well. It was a joyous experience to play Antakshari with all," Neeti said in a statement.
Shaan said that he had grown up listening to Mr Kumar's songs.
"He was and is an inspiration for youngsters who dream of making a career in the music industry," he said.
The contestants of the show visited a radio station to celebrate Mr Kumar's birth anniversary. They were joined by his son Amit Kumar.
"All these kids are brilliant and I am amazed at their talent. At their age, they are so smart and good with their singing. My only advice for them is to keep practicing and they will reach where they want to," Amit said.
Sharing his thoughts about Mr Kumar, Shekhar said: "Kishoreji is a legend and is an inspiration for all of us. His songs are timeless and are still being sung by this generation and will continue to amaze the generations to come."
Kishore Kumar, who was born as Abhas Kumar Ganguly, started his career in the field of acting, with Shikari in 1946. In 1948, music director Khemchand Prakash gave Kumar a chance to sing Marne ki duayen kyon mangu for the film Ziddi.
Maana Janaab Ne Pukara Nahin, Yeh Jo Mohabbat Hai, O Hansini, Roop Tera Mastana, Ek Ladki Bheegi Bhaagi Si, Haal Kaisa Hai Janaab Ka, Neele Neele Ambar Par and Aise Na Mujhe Tum Dekho are some of the hits the singer belted out during his career.
Kishore Kumar passed away aged 58 in 1987.
(This story has not been edited by NDTV staff and is auto-generated from a syndicated feed.)