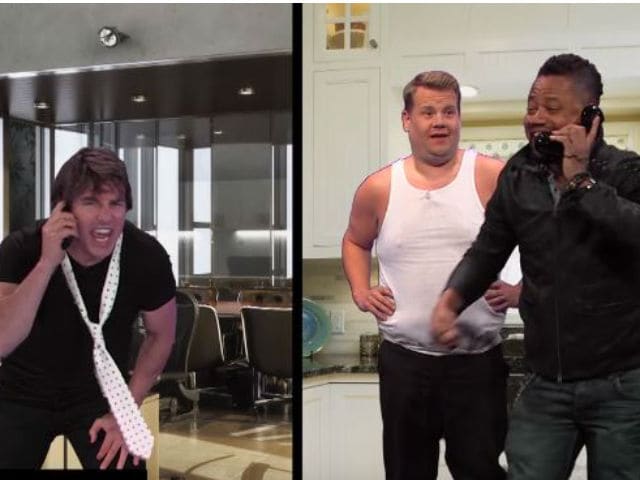 Tom Cruise, James Corden, Cuba Gooding Jr in a still from the video

Tom Cruise still got the moves. The 54-year-old actor was on The Late Late Show With James Corden and revisited his 35-year-long career in a hilarious nine-minute video which took us majorly down memory lane.
Tom and James enacted scenes from Top Gun (1986), Risky Business (1983), the Mission Impossible instalments (1996-2015), Rain Man (1988), Minority Report, Tropic Thunder (2008), Eyes Wide Shut (1999) and A Few Good Men (1992), to name a few, against a green screen.
So you see Tom dancing to Old Time Rock And Roll from Risky Business -sadly with his pants on. He also did the death defying stunts of Mission Impossible and asked a James Corden version of Jack Nicholson if he ordered the 'code red'.
But the highlight was when actor Cuba Gooding Jr crashed their enactment of the iconic 'Show Me The Money' scene from Jerry Maguire (1996).
Incidentally, this year Jerry Maguire celebrate its 20th anniversary. Released on December 13 in 1996, the sports dramedy got Cuba Gooding, Jr his only Oscar for Best Supporting Actor.
Tom's co-star Renee Zellweger got nostalgic about the film and told Etonline.com that she would love a cast reunion. "Oh sure! Why, are you hosting? Let's go!" Renee also said that she's still in touch with Tom. "He's a really good person. He's a very, very good person," she said.
The actor was on the show to promote Jack Reacher: Never Go Back, sequel to his 2012 film, which is set to hit the screens on October 21.
Watch the video here: