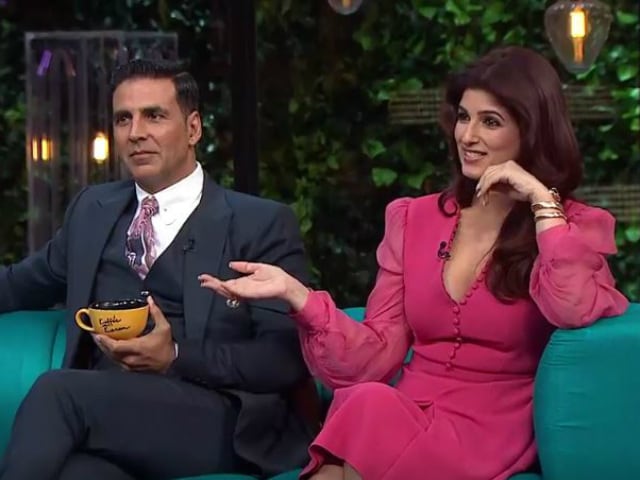 A still from the promo of Koffee With Karan .

We'll have our next cup of Koffee strong, please, no decaf. Karan Johar's popular chat show Koffee With Karan 5.0 made its debut on Sunday night with Dear Zindagi co-stars Shah Rukh Khan and Alia Bhatt but that's not the only reason why the show has been trending on Monday.
The premiere of Koffee With Karan season five was followed by a sneak peek of the next episode - on the couch are star couple Akshay Kumar and Twinkle Khanna.
At the launch of Twinkle's book Mrs FunnyBones last year, Akshay confessed that he lived in fear of what his outspoken wife might or might not say in public, especially on shows like Koffee With Karan.
Be afraid, Akshay, be very afraid.
In the promo, best friends Twinkle and Karan appear to have a ball of a time while Akshay declares: "I cannot tell you what I go through."
Here's a glimpse of Twinkle dealing with Karan's questions like a boss:
Karan: What does Akshay Kumar have that the Khans don't?
Twinkle: Some extra inches
But it's what she said next that left her husband both speechless and blushing. We're not going to tell you what it is - watch the promo to find out but we'll give you the hint of the century: it's a rather NSFW take on the title of Karan's first film Kuch Kuch Hota Hai, followed by an equally NSFW suggestion about his (hypothetical) book on Bollywood.
Oh, how do we love thee, Twinkle Khanna? Let us count the ways. Props to Akshay for keeping a suitably straight face despite clearly being knocked for a six.

We're going to be super disappointed if Twinkle doesn't win this rapid fire.
Koffee With Karan 5.0 is a season of debuts as Twinkle makes her first appearance on the show. Akshay has already been on Karan's guest list in Season 4.
Akshay Kumar, 49, has finished shooting courtroom drama Jolly LLB 2 and is busy with thriller 2.0, co-starring Rajinikanth. Akshay's upcoming films also include Naam Shabana and Gold. Akshay, who was last seen in Rustom, made special appearances in Dishoom and Akira.
Twinkle Khanna, 42, is currently prepping for the launch of her second book, The Legend Of Lakshmi Prasad.