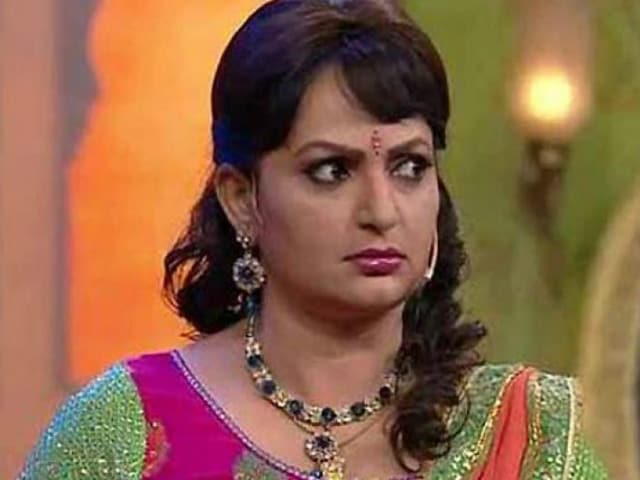 Upasna Singh in a still from Comedy Nights Live.

Actress Upasna Singh, best known for having played Pinky Bua on Kapil Sharma's ex-show Comedy Nights Live, has revealed why she quit. Ms Singh has claimed she was not paid in full for her work and dismissed the show as 'dead.'
Last week, Upasna Singh told Times of India that she had quit the show. In a new interview with Spotboye, Ms Singh said, "One should work in a place where he/she gets job satisfaction. What is live about Comedy Nights Live? It's 'Comedy Nights dead.' Mujhe bilkul maza nahi aa raha tha."
Ms Singh also alleged that she had received only a fraction of the money owing to her. "Till date, I have been paid for only two days of work when I have worked for four months with them. We had mutually agreed on certain clauses four months ago, now they have sent me some new clauses to sign upon," she said.
Ms Singh also accuses producers of having reneged on several other agreements. "They said that I will be seen in every episode. They said that I will be a very important character in the show. They said that I will be paid my acting fees every 30 days. Aur aisa kuch bhi nahi hua. Add this to the fact that I was not happy creatively," she said.
"They felt that I was still a part of Kapil Sharma's group. They seem to be anti-Kapil. They used my presence in their team because I was a prominent member in Kapil's team," said Upasna Singh.
Upasna Singh played Pinky Bua, the same character she made famous when the show was named Comedy Nights With Kapil. In April, Kapil Sharma and several other cast members switched to The Kapil Sharma Show. Comedian Krushna Abhishek took over duties on the original series.
Asked about working with Krushna Abhishek and co-host Bharti Singh, Upasna Singh said: "I wouldn't like to answer that question."
Ms Singh currently appears on the TV show Santoshi Maa and said that there is no dearth of work for her. She will not be looking for a role on The Kapil Sharma Show.
Upasna Singh has also worked in shows like Pari Hoon Main, Maayka, Yeh Zindagi Hai Gulshan and Nadaniyaan, and featured in films like Good Luck!, God Tussi Great Ho, Golmaal Returns and Chalk n Duster.