"Women of colour don't even get paid even half of what Caucasian women are paid. There needs to be an awareness that we're just there, that our presence is there, that we put in the work," said Viola Davis 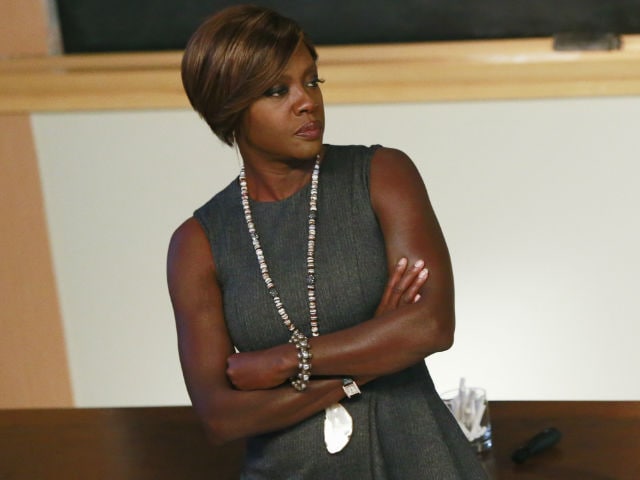 Viola Davis in a still from How To Get Away With Murder.

Actress Viola Davis, who broke the 'colour barrier' with an Emmy win last year, says "women of colour in Hollywood don't even get paid even half of what Caucasian women get," reports Deadline.
The How to Get Away with Murder actress , who became the first African-American to win the Outstanding Lead Actress in a Drama Series at the Emmys, feels the only way to get rid of the prevailing gender pay gap is to be vocal about it.
"Even when Caucasian women talk about pay and how we definitely are not paid the way men are paid, it's just completely, absolutely the truth, and we should (talk about that)," she said.
"You have people like Robin Wright, Jennifer Lawrence, and Meryl Streep, and just a number of women out there who are equally as talented and equally as important in the narrative, and what they're paid, should reflect that," she added.
"I would add to that, that women of colour don't even get paid even half of what Caucasian women are paid. There needs to be an awareness that we're just there, that our presence is there, that we put in the work," said Ms Davis.
The actress currently plays Annalise Keating in How To Get Away With Murder. The season three of the show will soon air on Star World and Star World HD in India.
Ms Davis said: "We have Taraji P Henson, who's been out there for well over 20 something years. I've been out there for 30 years. You have people like Alfre Woodard who have been out there for 40 years, S Epatha Merkerson who was on Law & Order, she's probably been out there for well over 40 years. You know, there are people who've been putting in the work. They trained, they studied the classics, they've done the theater, you know? But they need to be challenged."
"They just need to be thought of. That's really the question for me too. I need to be put to task, and that's why I started my production company, for exactly that reason, that we are somehow on the periphery a lot of times. I think television is starting to get it though, you know, because there's so much volume on TV. But we need to keep it up," she added.
(This story has not been edited by NDTV staff and is auto-generated from a syndicated feed.)