Watch: Why Shah Rukh Khan Never Made it to Koffee With Karan's Last Season. It is Nasty

Karan shared a teaser from the first episode of Koffee With Karan season 5 which will have Alia Bhatt and SRK as guests. Karan in his usual tongue-in-cheek mentions, 'You never made to last season' and Shah Rukh's reply was nasty 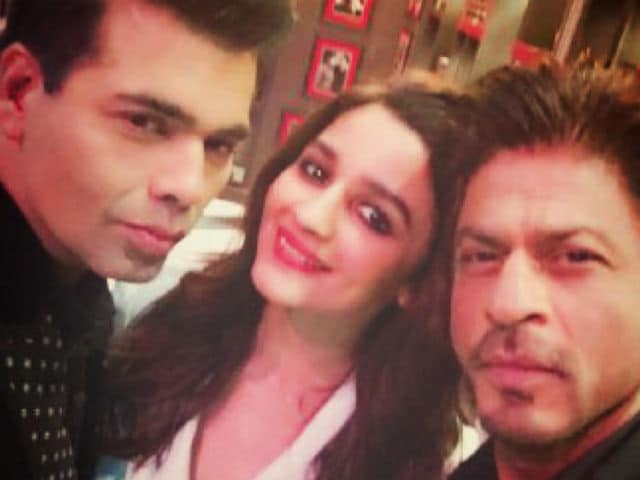 Image Caption This image was posted on Twitter by iamsrk

Filmmaker Karan Johar is all set to grill celebrities over Koffee and we can't wait. But when Bollywood superstar Shah Rukh Khan comes to that couch, expect the tables to turn.
Karan shared a teaser from the first episode of Koffee With Karan season 5 which will have Alia Bhatt and SRK as guests. Karan in his usual tongue-in-cheek mentions, 'You never made to last season' and here's what Shah Rukh replied:

Ouch! That must have left Karan tongue-tied. In the video, Karan and SRK also take a jibe at Alia who became rather 'infamous' due to her poor performance in 'Koffee Quiz' in last season. SRK and Alia, will be seen promoting their next, Dear Zindagi which will hit the screens on November 25.
Karan, who is actively promoting the talk show on social media, also spoke about getting the cosmetic procedure done in a special video, according to a report by IANS.
"It's me, my face. I am Botoxed, I put collagen up there, I have adjusted my nose, I have done what everyone does in my industry, so that is one of the things," Karan said in the video.
SRK set the ball rolling when he tweeted this picture from the sets of the show.


Some work days r not work. They r love and happiness. Thx Koffee team for having me over. Have a great season again! pic.twitter.com/g46B9hXI7z

Karan also shared this Koffee Rap which gave us a glimpse of how celebs are at loss of words when Karan strikes.