Sugandha Mishra mimicked Kangana Ranaut and the actress said: "I feel like slapping her" 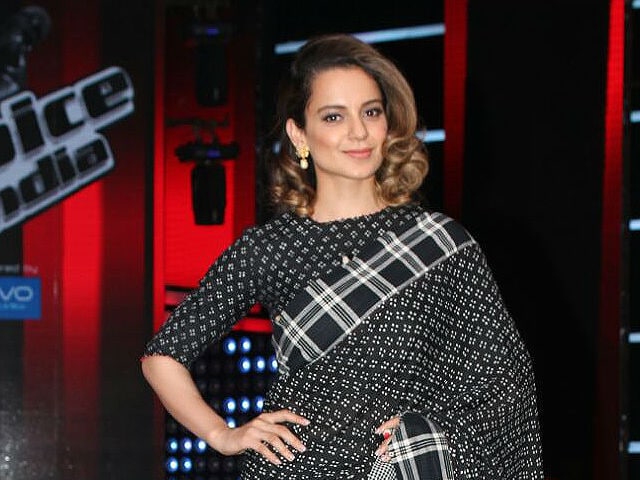 Kangana Ranaut on the sets of The Voice India

Actress Kangana Ranaut, who is on a promotional spree for her upcoming film Rangoon, recently said that she wanted to slap comedian Sugandha Mishra, after she did her mimicry on television show The Voice India season 2. Kangana, 29, attended the singing-based reality show with her co-star Shahid Kapoor recently. Singers Salim Merchant and Shaan, who star as coaches on the show, pulled pull Sugandha's leg and asked her to mimic Kangana in front of her. As soon as Sugandha completed her gig, Kangana, who is known to be outspoken, said: "I feel like slapping her," reports news agency IANS. Sugandha Mishra co-hosts The Voice India season 2 with Gunjan Utreja.
"It was a nail biting moment after Kangana's shocking statement. It surely was an awkward moment for Sugandha, but she took it in a sporting spirit and continued with the shoot," a source told IANS.
Recently, Kangana shocked the film industry when she revealed that she may get married this year. She said that she's in love and is hopeful to get married this year.
Kangana was last seen in 2015 film Katti Batti. The same year she starred in Aanand L Rai's Tanu Weds Manu Returns for which she won her third National Award. Kangana's won a National Award for 2008 film Fashion (Best Supporting Actress) and 2014 film Queen (Best Actress).
Kangana Ranaut will be seen as actress Miss Julia in upcoming war drama film Rangoon directed by Vishal Bhardwaj. She stars with Shahid and Saif Ali Khan in the film which will hit the screens on February 24. Rangoon is a love triangle set in the backdrop of World War II.
(With IANS inputs)