Anas Rashid got engaged to Hina in a private ceremony on Monday. He is the star of TV show Diya Aur Baati Hum 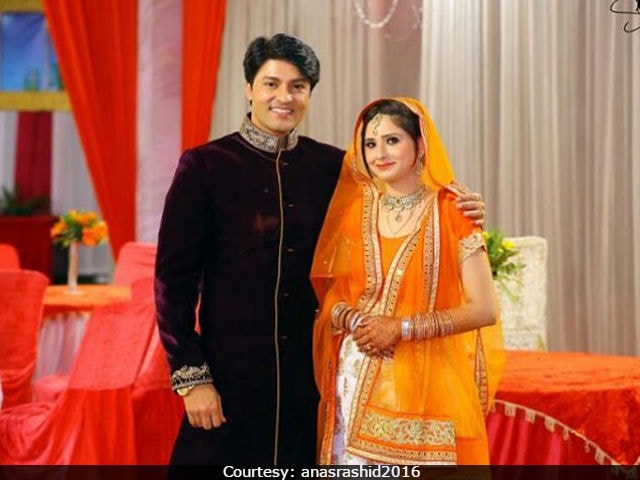 Television star Anas Rashid, who featured in Diya Aur Baati Hum, got engaged to Hina in a private ceremony on Monday. Pictures from the ceremony were shared on Instagram from an unverified account purporting to be Anas' revealed that he and Hina exchanged rings yesterday. "Engaged. Happy day and happy memories," he wrote. Hina, 14 years younger than Anas, is based in Chandigarh. She is a native of the actor's hometown Malerkotla, Punjab. A couple of weeks ago, the 36-year-old actor told Hindustan Times that he always wanted an arranged marriage and he agreed to marry Hina without even seeing her photo. The wedding date hasn't been fixed yet as the actor plans to spend more time in knowing Hina.
Anas wore a maroon sherwani while Hina complement him in a yellow lehenga.
Check out these pictures from their engagement ceremony.

Does a cap needed??

Anas was recently accused of sexism after a quote of his about Hina's professional life went viral. Of marrying a woman from outside the industry, he told Hindustan Times, "I'm working in this industry; aur agar bahu bhi kaam karegi, toh ghar pe kaun rahega? (If my wife works, who will be at home?)" He said that his family is happy with his career in the industry.
Anas Rashid was earlier rumoured to be dating television actress Rati Pandey. However, they broke up in February 2016. Anas Rashid is the star of TV shows like Diya Aur Baati Hum, Dharti Ka Veer Yodha Prithviraj Chauhan and Kahiin To Hoga.
Congratulations, Anas Rashid and Hina.