Amitabh Bachchan announced on social media that in the interest of gender equality, he plans to leave an equal share of his wealth to his daughter ShwetaBachchan Nanda and son Abhishek Bachchan 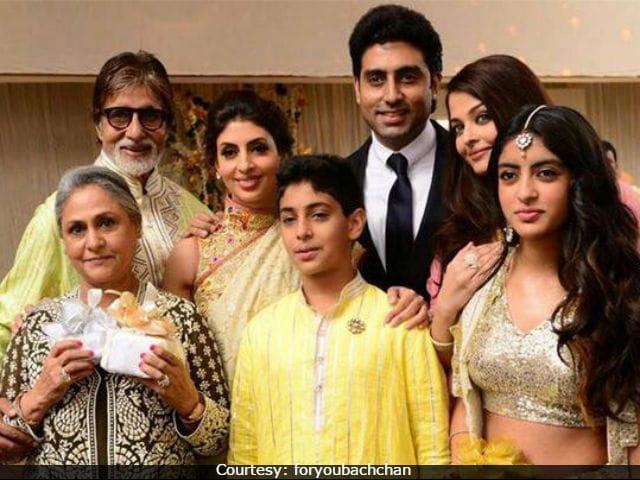 Actor Amitabh Bachchan, 74, has announced on social media that he plans to leave an equal share of his wealth to his daughter and son - in the interest of gender equality. Mr Bachchan is the celebrity of celebrities, adored for his decades of uber stardom and admired for his work in film and on TV. Mr Bachchan and his wife Jaya have a daughter and a son - columnist Shweta Bachchan Nanda is 42, actor Abhishek Bachchan is 41. In a picture he tweeted early this morning, Amitabh Bachchan holds up a placard that reads: "When I die, the assets I shall leave behind shall be shared equally between my daughter and my son." The hashtags - #WeAreEqual and #GenderEquality. This is Mr Bachchan's post:

Mr Bachchan told NDTV exactly this last September, when asked about changes in society he'd like to see, "I can only do that through campaigns and for whatever my worth, after I die, my assets will be equally divided between my daughter and son."
Dividing one's wealth equally between children regardless of gender requires no public statement, Mr Bachchan's critics will say. He was widely disparaged last year for writing an open letter addressed to his granddaughters Navya Naveli and Aaradhya, telling them to live life on their own terms. Holes were poked in the text of his letter, which was dismissed as publicity-seeking and contradictory to its stated intent. In this instance, by publicly advocating gender equality, perhaps Amitabh Bachchan hopes to inspire millions of his followers into doing what most of will take for granted.
Amitabh Bachchan was ranked 18th on the Forbes list of highest paid actors in the world last year, with earnings of over $20 million. Mr Bachchan has often spoken about how fortunate he considers himself to still be working at the age of 70-plus. It is not minor roles that he is cast in but star turns. Just two years ago, he won his fourth National Award for Best Actor, for the film Piku. He also hosts Kaun Banega Crorepati, the Indian edition of international game show Who Wants To Be A Millionaire?
Amitabh Bachchan starred in three films last year - Wazir, Te3n and Pink. This year, he stars as the title character in Sarkar 3, the trailer of which has just been released.