Salman Khan Says Sridevi, A Legend, 'Cannot Be Compared' With The Khans And Akshay Kumar

Salman Khan highlighted that Sridevi, having starred in 300 films (Mom rounds off the figure), is beyond comparison with anybody, let alone himself and other Bollywood stars like Aamir Khan, Shah Rukh Khan and Akshay Kumar 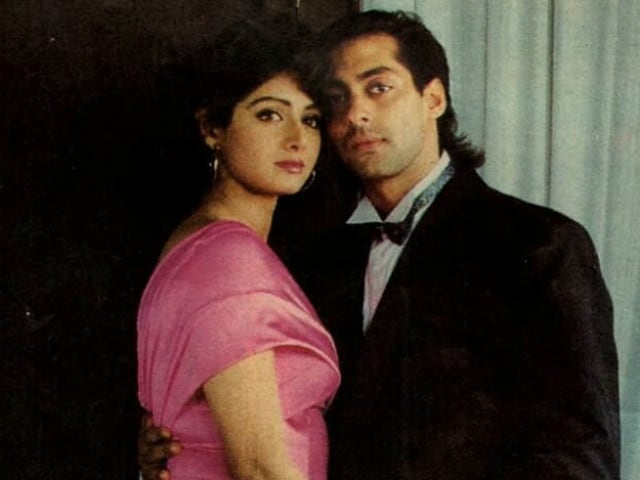 Salman Khan and Sridevi attended an award ceremony together, where, the Chandni actress was described as "legend" by the 51-year-old star, reports Asian Age. Sridevi, who unveiled the poster of her upcoming film Momat the awards gala, was escorted to the stage by the Bajrangi Bhaijaan actor and was introduced in the most admirable way. Salman highlighted that Sridevi, having starred in 300 films (Mom rounds off the figure), is beyond comparison with anybody, let alone himself and other Bollywood stars like Aamir Khan, Shah Rukh Khan and Akshay Kumar. Salman and Sridevi are co-stars of films like Chaand Kaa Tukdaa and Chandra Mukhi, both of which released in the nineties.
Introducing Sridevi, Asian Age reported Salman as saying: "Aamir Khan, Shah Rukh Khan, Akshay (Kumar)... we have all done many films. Aamir may have done about 50 films...he has a lot of time as he does only one film per year. Shah Rukh may have done more than 100 films. Put together, we may have all done about 250-275 films. But there is one legend, who is very talented, dedicated, hard-working and professional. She completed 300 films, after starting her career as a child artiste. Our work cannot even be compared to this legend. She is none other than Sridevi."
Meanwhile, Sridevi released the first poster of Mom on Tuesday when it featured amongst top trends on Twitter. Within minutes, Twiiter assured that Sridevi's new film will be a "blockbuster".

When a woman is challenged... Here's presenting the first look of MOM. #MOMFirstLookpic.twitter.com/taaJBeDH1d

Mom is Sridevi's yet another women-centric film after Gauri Shinde's 2012 film English Vinglish. Sridevi, who made her acting debut as a child actor at the age of four in 1967's Muruga, has successful films like Sadma, Chandni, ChaalBaaz and Judaai on her resume.
Meanwhile, Salman Khan was last seen in Sultan and is prepping for Tubelight, his next film with Kabir Khan.